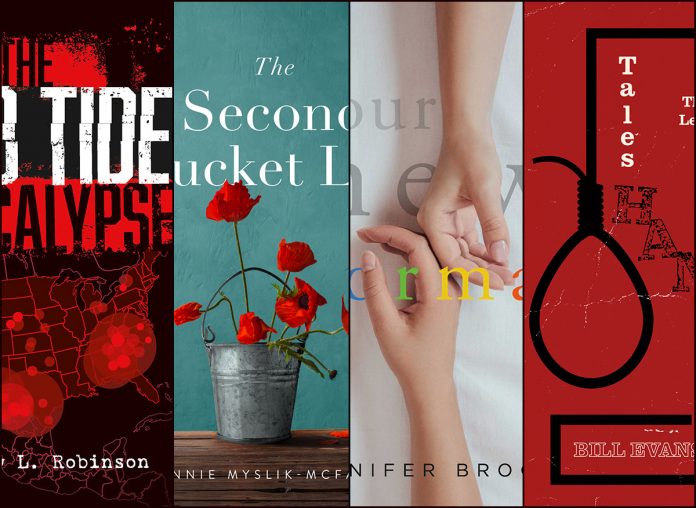 BookBaby designers share stories of some of their favorite book cover designs to give insight into the creative process of making your book cover stand out from the crowd.

As addressed in “A Look Inside The Mind Of Your Book Cover Designer,” there’s more to getting a great book cover design than just hiring a professional. You need to communicate the essence of your story and find a way to inspire your designer. Then, the designer has to interpret your ideas and come up with a graphic that conveys the feeling and sentiment of your story in one quick look.

To better understand the way the design process works and the things that might trigger the creativity of a graphic designer, we’ve asked some of the fantastic artists at BookBaby’s Design Studio to choose a book cover design from their portfolios that captured something special. These four artists walk us through the process that got them from the initial concept to the completion of a stunning book cover. 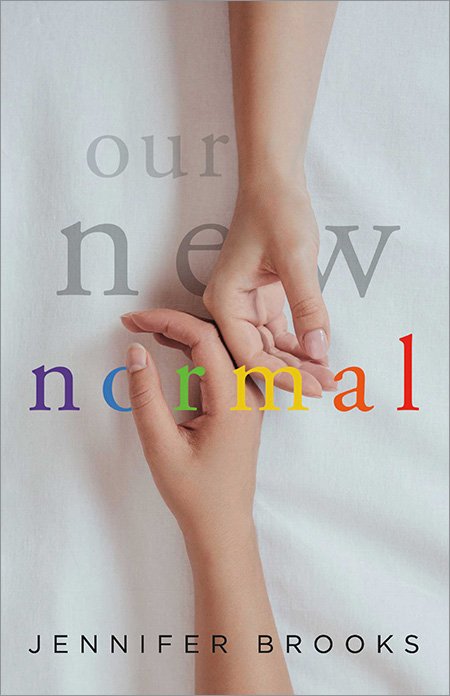 For this cover, the author had pitched a couple of concepts for her beautiful story about the struggles of a young LGBTQ+ woman. I was drawn to the second option she offered, a teenage, same-sex couple holding hands, though I felt that it needed something more. There were plenty of stock images of couples walking in a park or down a street holding hands, but none of them felt as intimate and personal as this story.

As a solution, I rendered an image of two young women’s hands subtly touching each other in a way that I felt visually echoed the experience of the couple in the book: new to their feelings and trying to figure it all out.

For the typography, I noticed the word “normal” had the same letter count as the colors of the gay pride flag. To complement the image, I incorporated those colors into the title, weaving some of the characters between their fingers for added visual depth. I left the background neutral to let the colors really pop.

Here’s part of the note we sent the author:

Hello! Thank you for your detailed notes regarding your design preferences. We searched far and wide for stock photography that met your descriptions. There were some that came close, though none really felt authentic enough to represent your wonderful story. We liked your second option that focused on holding hands, and found a striking image that spoke to us. There is a subtle intimacy conveyed that felt very powerful. In addition to its visual impact, it also provided a great opportunity to explore an intricate typographical treatment. The title weaves in and out of the two hands, starting subdued in the background, then comes to the foreground with the word “normal.” That word had the perfect letter count in which to display the colors of LGBTQ pride, in contrast to the other neutrals that surround it. We feel this combination provides a very strong, contemporary look that will draw your potential readers to the shelf (and screen) to see more of what your book is all about.

I was pleased with the result and very happy to hear that the customer liked the design and approved! 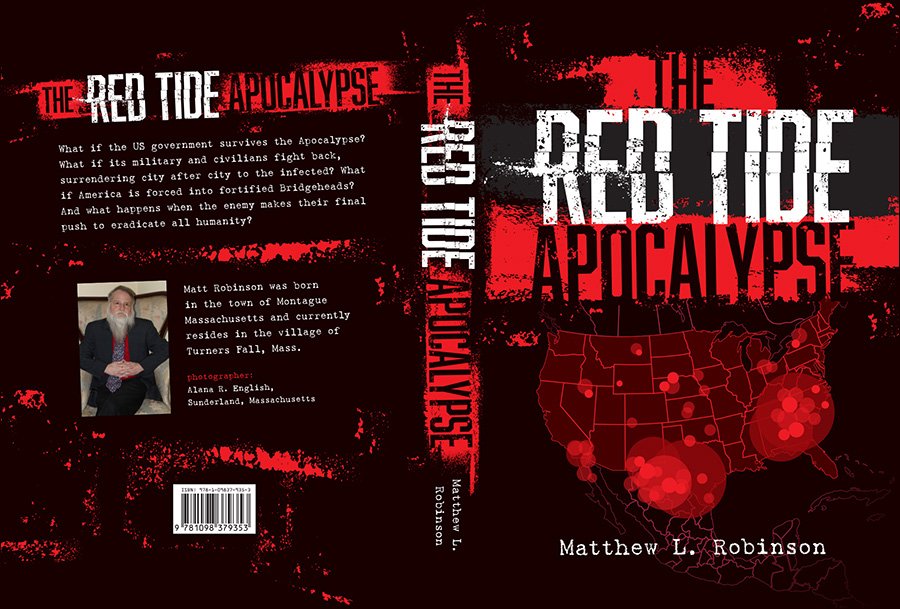 The Red Tide Apocalypse is a science-fiction/horror novel that explores the ramifications of a worldwide pandemic and the fight against it. The infected in this novel transform into red eyed beasts who attack and transmit the disease. But they are not your typical walking-dead zombies, starving for brains. Instead, they are fast moving and strong, retaining their mental faculties and organizing to attack the healthy.

The only design instructions author Matthew L. Robinson gave us was to use the map included on his mock up cover, showing the spread of the pandemic across the United States. Matthew also said that he preferred the colors red and black.

Once a job is booked, it is first reviewed by our preflight team. They check all the materials: title, cover copy, manuscript, design direction, and any images included. For best result, we require images to be a minimum of 300 DPI. The map that Matthew supplied was below this, so we reached out to let him know that we could use the image but it might not look so great once printed. This is very common, and Matthew replied that he understood.

Being a horror and sci-fi fan myself, I just knew this wasn’t what would attract eyes on the shelf of a bookstore. Even though Matthew requested that we use the map he supplied, I felt it necessary to offer an alternate solution. After all, he hired BookBaby to design a great cover for him and I don’t get to design many horror covers. I was determined to make this one count! 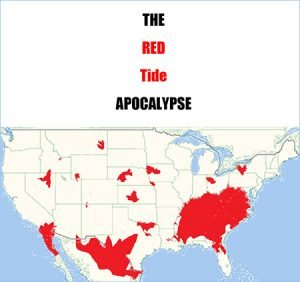 I wanted to re-create the supplied map so that it would look like an on-screen graphic on a television news program or something you would see in a science research or military facility. Instead of the spreading red shape to indicate the pandemic spread, I used red radar “blips” or circles of varying sizes to show the hot spots across the country.

For the front and back cover type, I wanted to create something bold and distressed that had the same feeling of civilization on the verge of collapse. I took the title, word by word, and mixed it with grungy textures above and behind to make the words look like they are breaking apart in static. I carried these textures over to the back cover to wrap everything together. The end result is a book cover design that really nailed the author’s idea and conveys the distress of the tale within. 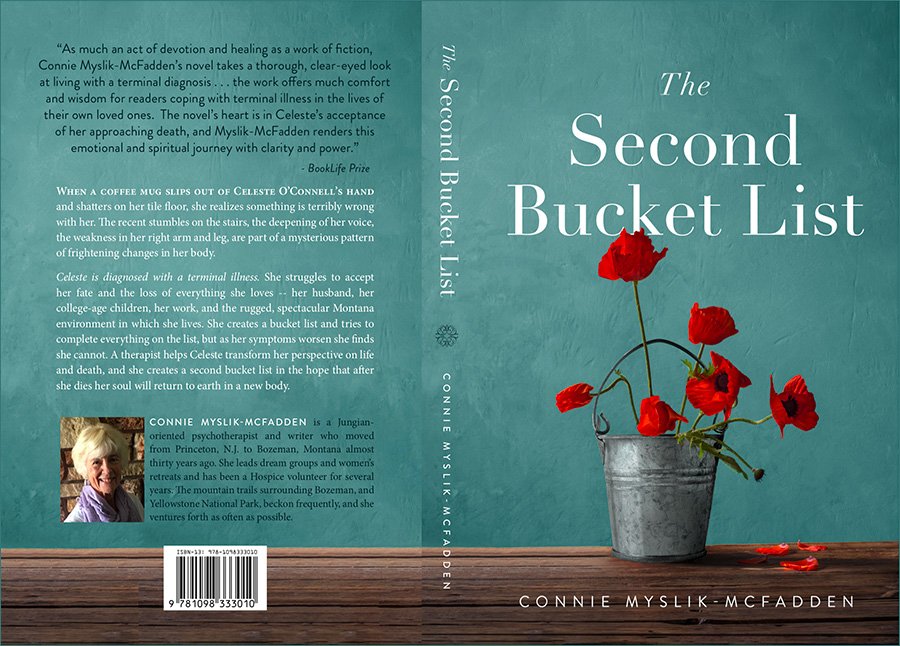 This is a cover I was particularly proud of as the outcome was definitely was a collaborative effort between the author and me. She suggested the concept of a bucket of poppies and mentioned liking the color turquoise/teal. The turquoise ended up being a great color to contrast against the red poppies.

She also suggested having each item on “the bucket list” written on the stems of each poppy. As the designer, I had reservations about that idea. I’ve learned that less is almost always more, and I didn’t want the image to look too forced or busy.

My favorite part of being a designer is being presented with a problem and finding a solution and bringing a vision to life while remaining true to the author’s vision. This is an example where I believe the author’s concept combined with my design skills to create a simple, impactful cover design we were both very happy with!

Tales That Will Leave You Hanging 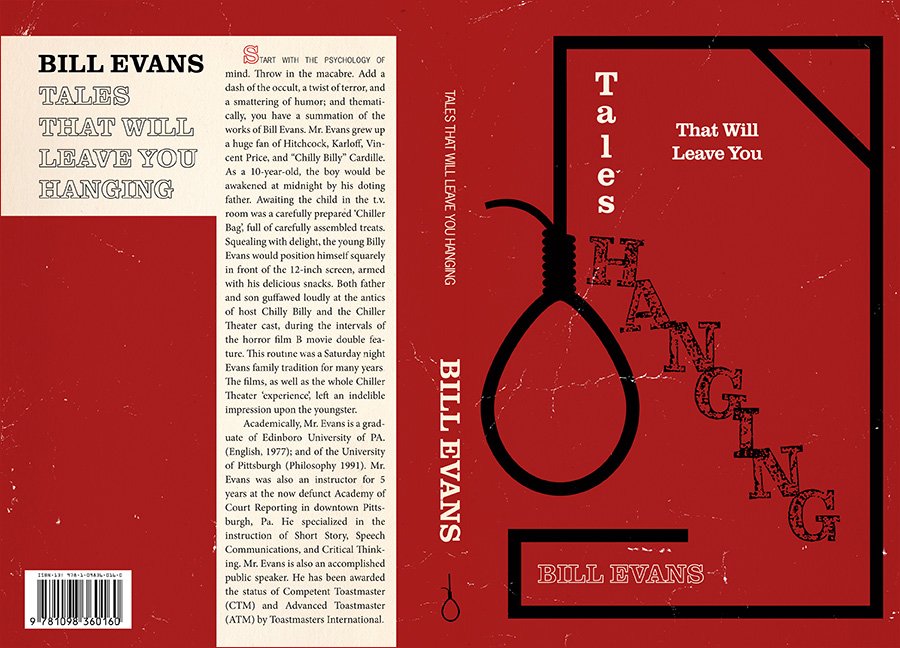 This book is a horror anthology featuring 25 short stories and seven poems. The author mentioned he wanted a gallows on the cover and supplied a crude drawing of the gallows with some hand drawn text on a diagonal “hanging.” What really sparked my imagination was the design survey and back cover text where Mr. Evans mentions his love of classic horror writer/directors — specifically Hitchcock, who I am also a fan of. I am a huge fan of the ’60’s and ’70s typography and design aesthetic as it is.

My mind went to the opening of North by Northwest. The lines. How they appear on to the screen, almost Bond like. I envisioned the gallows being created just with lines, wrapping the cover and the text within. With that in my head, I moved on to what fonts I wanted to use. I watched some more Hitchcock openers and also looked at some of his posters and noticed “Clarendon” used in Vertigo. It hit a nerve as I felt it also has a little western look and the gallows were giving me a western vibe.

The final client comment was to use dark colors: red (blood red) and black. I had all of my ideas and went to work.

I looked on our stock site for some gallows imagery to give me starting point and created the gallows with lines. It came together rather quickly, but I had no noose. I placed the title text similar to what was supplied.

I added the outlined font look for his name to define that was separate from the title. Originally, as I said, I had no noose and it was a sans serif font “Aktiv Grotesk” that I used for the word “hanging” in the diagonal. It just didn’t look right to me. I landed on the grungy western font “Pulpo Rust” that had a similar look to “Clarendon” but also added to the western idea. I aligned and adjusted each character to show a little motion and was happy with the result. I then found a minimalist noose and added it to the end of the line drawing I created. 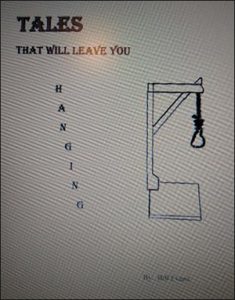 I mirrored the gallow lines on the back cover but much larger and reversed in white. There I added his synopsis alongside the name and title, this time in a more straight forward look.

To finish it all off, I overlayed a weathered paper texture and some book wrinkles to give it that lived-in feel and give it some depth.

I think what I was most proud of was how close the finished product came to the original vision in my head. My goal was to create something you may see on the cover of a book or movie poster from the ’60s or ’70s, and I felt this cover achieved that.