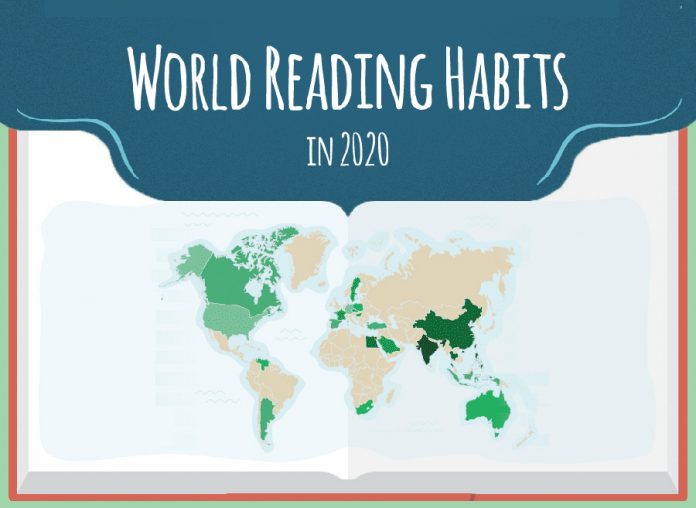 Over the years, we’ve posted a number of “reading habits” infographics from Global English Editing on this blog, including this one from 2017 and another from 2018. This year, GEE outdid themselves, digging into all sorts of metrics to put the world’s reading habits into perspective.

Now, I’ll admit to skepticism over some of the info here. Is it really possible that, with populations of 1.3 billion and 1.4 billion people respectively, India and China’s populations spend more time reading — on average, per person — than every other country in the world (except Thailand)? My basic math noodlings puts that as an average of 9.3 hours per-week per-person for 2.7 billion people. That’s 25,110,000,000 hours of reading a week! Fun fact: Combined, those two countries make up 35 percent of the world’s population.

Let’s not forget, things are still in motion in 2020. A Promised Land, Barack Obama’s new memoir, just sold 890,000 copies on its first day, which means that list of best-sellers in 2020 might get rearranged a bit.

In other news, did you know that 16 percent of romance readers are men? And, 45 percent of Americans read the Bible at least three times this year? (Whether that’s cover-to-cover or isolated passages, I don’t know).

This teaser gives you an indication of the fun you can have poring over this infographic. Next up, I’d like to see an infographic that charts how much time Americans spend reading infographics. Can someone get to work on that for us?

The eight elements of a successful eBook launch