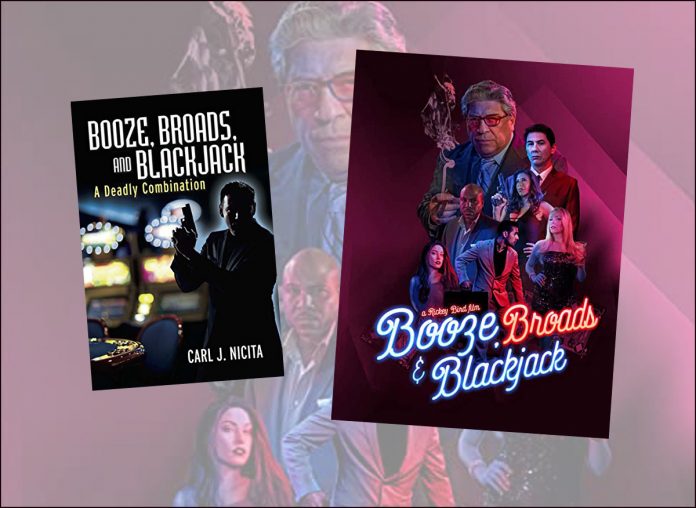 BookBaby author Carl Nicita’s story shows that — with a good story, a good title, a few choice contacts, and some creative promotion — you can achieve your literary dreams as a self-published author.

Carl Nicita recalls the exact moment in 2016 that set off a chain of life-changing events. “I was doing a book signing in Bakersfield (CA) and this guy comes by my table. He says, ‘That title would make a great movie title.'”

The book title? Booze, Broads, and Blackjack: A Deadly Combination, Nicita’s very first novel. The man making this prophetic observation happened to be a friend of indie film producer Rickey Bird, Jr. Over the next few years, Nicita, Bird, and others collaborated to bring the book to the silver screen and beyond. The mobster movie is now available through Amazon Prime video.

The book and film depict the story of a fictional Syracuse radio host named Jack King who attends a celebrity blackjack tournament in Las Vegas. Of course, like any good mobster crime thriller, King experiences some deadly twists and turns while he’s there. The film features Vincent Pastore (The Sopranos) as King’s mob boss uncle who demands that his nephew accept an assignment for his gang. The cast includes horror movie queen Felissa Rose, best known for playing Angela in the 1983 cult hit Sleepaway Camp; James Duval, who appeared in Independence Day, Donnie Darko, and Gone in 60 Seconds; and Vincent M. Ward, who played Oscar on The Walking Dead.

The book and film fulfill a life-long dream for Nicita, who moved from Syracuse, NY to southern California to pursue his writing career. “When I was a youngster growing up in a small town just outside Syracuse in the 1960s, I was fascinated by books, TV, movies, and particularly radio,” the BookBaby author says. “There was a bigger universe out there than my small little town. And they also helped spur my ‘what if’ imagination. What if someday, I could be a writer and have my book in a library? What if I could be on the radio? What if I could be on TV? What if I could live in California, walk the streets of Hollywood, and make a movie? All these things I dreamed about manifested in my life.”

Nicita made the move west and worked in local radio and television jobs for over a decade. Frustrated by the ups-and-downs of the media business, he moved to Santa Monica and worked in the Police Department as a dispatcher and later as a traffic officer.

“I’ve always loved to write,” he says. “I started out as a kid with a fascination with newspapers. I had a newspaper column for a local paper as a 13-year-old. Throughout the years, I would attempt to start writing a book, but being busy with work and raising a family made it impossible to concentrate on.”

Nicita received some important advice from Stephen Cannell, a crime author who has influenced his writing. Cannell’s work includes the Shane Scully mystery series as well as dozens of TV series, including The Rockford Files, The A-Team and 21 Jump Street. “I met Stephen at a book signing event many years ago. I asked him how he was able to create such wonderful characters. He said it was very simple: If you want to be a writer, then write, write, write — and then write some more.”

When Nicita retired in 2015, he did exactly what his literary hero suggested, but with a twist. “I finally had the opportunity to pen my story. But, instead of writing from start to finish, I did something different. I wrote the beginning of the book and then wrote the end of it. Then I filled in the middle. It made sense to me, because it’s almost like taking a road trip. You know where you started and where you’re going to end. The journey is the unknown part.”

When that writing journey hit some potholes, Nicita found encouragement through an old friend. “I originally wrote five chapters and showed Paul, a former co-worker, what I wrote. He asked me where the rest of the story was and I told him I could not write anymore – it was too hard. He insisted that I meet with him each week with a new chapter for him to review. After the 12th chapter, I just kept writing and did not stop until the novel was finished. I am grateful for Paul pushing me to complete it.”

Nicita did his homework when it came time to publish his manuscript. “I joined a local writer’s group, but they were all into the traditional publishing model of agents, publishers, and all that. You see all these people writing and never going anyplace trying that route. The world has changed and it’s so much easier to self publish now. It’s like the movie business — indie is the way to go.”

“I did a lot of research and compared BookBaby with Create Space and others, and BookBaby seemed to be the best to work with for a new author,” says Nicita. “I liked the fact that you were associated with CD Baby and the large distribution network you have.”

As most self-published authors learn, the challenge is getting the word out once their books are finished. Nicita tried an interesting marketing idea that worked out well. “When I published my book, BookBaby offered a PR Newswire package that included a Times Square billboard promotion where, for an extra $500, the cover of your book was shown on those huge screens in New York City. I timed mine so that it ran on Thanksgiving during the big Macy’s Thanksgiving Parade, and then again that following Saturday. I shot up pretty high in the Amazon rankings!”

Despite his relatively late start into the publishing and movie worlds, Nicita knows there are many more stories that he wants to tell. “I’m a positive thinker and I believe anyone can do this,” he said, noting that legendary author Mario Puzo didn’t publish The Godfather until he was in his 50s. “Here I am at age 65 and have a movie up on Amazon Prime! It doesn’t matter who you are, where you are, or what age you are. Anyone can self publish if they want to pursue it.”

Related Posts
Behind The Scenes With A TV Writer: Interview With Eric Trueheart
Of Creativity And Madness
Douglas Keister’s Race To Publish A Book About The Paradise Fire
From Book To Film: 10 Great Adaptations
Why I Am Self-Publishing My Fifth Book