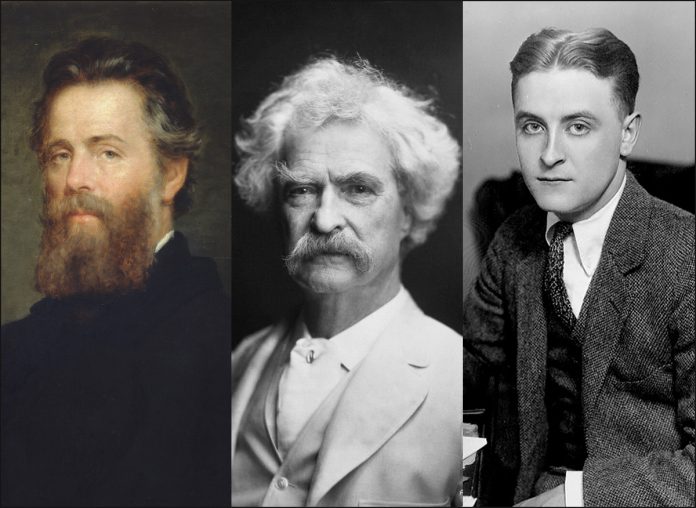 Melville, Twain, and Fitzgerald might be best known for their classic literary contributions, but they all suffered professional and critical disasters during their lifetimes.

Writing is not a vocation for the faint of heart. Not only do writers contend with the fickleness and slippery trends of the marketplace, careers are often brought down or crushed by unlucky breaks. The following tales illustrate how a shift in fortunes can be triggered by a simple mistake or random event — something that we all are prone to as ephemeral, time-dated residents of planet Earth.

Herman Melville gained profits and achieved literary success early in his career with his maritime adventures, Typee and Omoo, based upon the author’s real-life experiences as a crewman on whaling ships and in the US Navy. More modest successes followed, including Redburn and White Jacket, after which Melville dove enthusiastically into the writing of his masterwork, Moby Dick.

On October 18, 1851, London printer Richard Bentley published the book, which was thoroughly butchered during the editing process with entire sections moved around or left out entirely. At the last minute, Melville had retitled his work Moby Dick, but the book went to print with the uninspired original title, The Whale. Five hundred first editions of The Whale went to print, featuring richly designed, cloth-bound covers with imprints of diving right whales. Of course, Moby Dick was a sperm whale.

It was common during that era, when many American books were printed in England, for ham-handed editing to be inflicted upon a title. As Megan Garber described it in The Atlantic, “This was Victorian England; publishers regularly — and heavily — edited the manuscripts they were printing to remove content they deemed vulgar and/or ‘politically suspect.’ They would generally make these changes, moreover, without authorial approval.”

Extracts that Melville had placed at the beginning of the book to frame the story were moved to an Appendix in the back of the book, causing some critics to comment on the disjointed narrative.

The most grievous error by Richard Bentley was the omission of the Epilogue. Many critics panned the book because it had been written in the first person from the perspective of Ishmael. The Epilogue recounts how Ishmael survived the sinking of the Pequod and wraps up the story neatly. Without the Epilogue, it becomes nonsensical for the tale’s narrator to have died at sea, leaving no one behind to relate the event.

In the age before copyright laws were in force, American publications often reprinted British reviews and reiterated negative commentary without even reading the book. For example, the New York-based International Magazine picked up a negative review from the London Spectator:

It is a canon with some critics that nothing should be introduced into a novel which it is physically impossible for the writer to have known: thus, he must not describe the conversation of miners in a pit if they all perish. Mr. Melville hardly steers clear of this rule, and he continually violates another, by beginning in the autobiographical form and changing to ad libitum into the narrative.

A flurry of bad reviews from Britain percolated through American magazines for several months, although the Epilogue and other corrections were added to the American release of the book.

Melville’s high expectations for Moby Dick were crushed by its reception and, over his lifetime, the book only sold 3,000 copies (fewer than half of what Typee sold in two years). Although he continued to write, his popularity waned and he eventually took a government position at the New York City docks as a customs inspector until his death on September 28, 1891.

Samuel Clemens — who successfully branded himself as Mark Twain and gained unprecedented worldwide recognition as an author — was driven to financial dissolution in a bid to develop an efficient mechanical typesetting machine. The Paige Compositor, designed to eliminate the need for human intervention while typesetting, became a debacle and the only working model — with 18,000 separate parts — ended up as a museum piece in the Twain House in Connecticut.

Clemens’ career included a stint as a journeyman printer and compositor, so he clearly understood the potential of the machine. From the moment Clemens encountered the typesetting machine in James Paige’s workshop, he was dazzled by the possibilities and convinced that this revolutionary device represented a golden financial opportunity. While the Paige Compositor was truly an engineering marvel, and could successfully and precisely set and distribute type, Paige was fixated on enhancing the machine so it could create justified lines of type. His insistence on including this complex feature — that he could never get to work reliably — fatally delayed release and a simpler machine from Linotype grabbed the market. In the meantime, Clemens’ investments in the project topped $170,000 by the close of the 1880s, leaving him in deep financial straits, exacerbated by other bad investments.

To pay off creditors and restore his financial equilibrium, the 60-year old Clemens, his wife Olivia, and daughter Clara set off on a five-year tour, dubbed the “Round-the-World Comedy Tour” by author Richard Zacks, delivering stage performances to welcoming audiences in India, South Africa, Australia, and other countries. The tour, however, was capped by tragedy upon the family’s return to London: the death of daughter Susy at the family home in Hartford, CT during their absence. As Clemens recorded in his notebook, “The cloud is permanent now,” and Olivia, exhausted from the travel, was traumatized to the point that she would never return to their Hartford home and never fully regained her health.

Clemens did not forget the role Paige played in his misfortunes, and wrote in his autobiography: “Paige and I always meet on effusively affectionate terms; and yet he knows perfectly well that if I had his nuts in a steel-trap I would shut out all human succor and watch that trap till he died.”

With the proceeds from his round-the-world tour and the release of a book of his collected works, Clemens successfully turned the corner on his financial woes. He died, debt free, in Redding, CT in 1910.

Sometimes it’s not a single event that destroys a writer’s career or ends it in an ignominious way, but a steady spiral of misfortune. For many years, F. Scott Fitzgerald was at the epicenter of a dynamic community of writers, first in Paris in the 1920s, then as part of the East Coast literary community, and finally at the heart of a Hollywood crowd with a group of other writers following the lure of film money. The move to the West Coast, however, seemed to intensify Fitzgerald’s long-standing drinking problems, and his work was not being well-received by the studios.

For years, Fitzgerald primarily survived on his short story sales to magazines more than income from his novels. Writing for The New Yorker, Deborah Treisman says, “Short stories were Fitzgerald’s bread and butter. Yes, he sold his work for money from 1919 on, and was acutely aware of how much he could make, quickly, with stories, as opposed to waiting longer for a novel to be complete enough to serialize. He never lied to himself about what he himself called ‘hack work’ and sometimes, ‘trash,’ and keenly felt the difference between commercially successful and imaginatively satisfying stories.”

The downward spiral for Fitzgerald continued with heart issues that developed over a decade. A history site, The Vintage News, chronicles the last few hours of his life, “. . . on the night of December 20,1940, Fitzgerald and [Sheila] Graham attended the premiere of This Thing Called Love, starring Rosalind Russell and Melvin Douglas. As the couple were leaving the theater, Fitzgerald, feeling dizzy, stumbled and leaned on Graham for support, whispering to her, ‘They think I am drunk, don’t they?'”

The article continues, “The following day, Fitzgerald was eating a candy bar and leafing through his Princeton alumni newsletter. Suddenly, he jumped up from his armchair, clutched the mantelpiece, gasped, and crumpled to the floor. At 44 years of age, F. Scott Fitzgerald, suffering a massive heart attack, was dead.”

Fitzgerald’s masterwork, The Great Gatsby, was not widely praised on its launch. A review by the New York World, was headlined, “Fitzgerald’s Latest A Dud.” His last royalty check from Scribner was for $13.13. Interestingly, The Great Gatsby was re-released during World War II and gained success as an Armed Services Edition, sized so it would fit in a serviceman’s pocket.

Book critic Maureen Corrigan, who initially found The Great Gatsby unimpressive, especially the portrayal of the female characters, said in an interview with NPR, “In fact, that’s one of the reason why Fitzgerald thought it didn’t sell well in 1925, because there are no likeable female characters and women drive the fiction market.” She has changed her assessment and writes about it in her book, So We Read On: How the Great Gatsby Came to Be and Why It Endures.

More tragic deaths and near misses

Tennessee Williams choked to death on a bottle cap that lodged in his throat, likely after a bout of heavy drinking. Sherwood Anderson accidently ingested a toothpick, which punctured internal organs; he died of the resulting infection. Lord Byron caught a fatal infection when doctors used leeches while attempting to cure a fever.

Stephen King was hit and nearly killed by an inattentive driver while taking a walk on a country road in Maine. King commented about that incident on Twitter, “On June 19th, 1999, I got hit by a van while taking a walk. As I lay unconscious in the hospital, the docs debated amputating my right leg and decided it could stay, on a trial basis. I got better. Every day of the 20 years since has been a gift.”

Most of us live with a reasonable sense of security and stability, ignoring the everyday precariousness of our existence. We live on planet traveling through space at 67,000 miles per hour that has, over time, been struck by asteroids that eliminated almost all life and been plagued by a variety of viruses and bacteria that challenge our immune systems while climate disruption threatens the survival of humankind.

It’s all fodder for the imaginative writer.

Images of Melville and Fitzgerald are in the public domain. Image of Clemens by A.F. Bradley, New York/Public domain.

Related Posts
Of Creativity And Madness
Confronting bad book reviews
So Bad, It’s Good
Famous Authors Who Died Before They Were Famous
Day Jobs And The Independent Author – Famous Authors Had Them, Too!