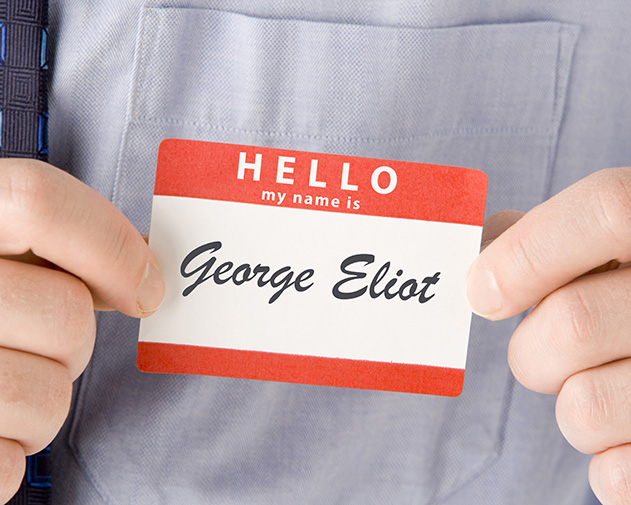 When my first book was being published, I toyed with the idea of using a pen name for about three seconds. Looking back, I may have missed an opportunity.

“If you were starting over, is there anything you would have done differently?” Someone recently asked me this at a party, referring to my writing career. I blurted out that I probably would have used a pen name. They seemed as taken aback by my answer as I was, for I hadn’t really given this notion any thought. When my first Mr. Pants book was being published, I had toyed with the idea of using an alias for about three seconds. But vanity got in the way. Looking back, I may have missed an opportunity.

Other writers have covered pen names before on this blog (e.g. this infographic of a historical tour of pen names), but I think there’s more to say on the subject, especially on how to go about doing so. Here are a few of the many reasons authors use pen names.

In the nineteenth and early twentieth century, many female writers used pen names because they feared their work would not be taken as seriously as male authors by the industry. So, Mary Ann Evans became George Eliot and Karen Blixen became Isak Dinesen.

While industry bias may be less of a factor today, some writers (and publishers) still feel that audiences are less likely to accept works by women or men in certain genres. J.K. Rowling, for example, decided against using her first name (Joanne) because she thought boys might be less inclined to read a fantasy book by a woman. Many male romance novel authors have taken female pen names for the same reason, like Harold Lowry (Leigh Greenwood) and Bill Spence (Jessica Blair).

Some authors go one step further and opt out of the whole gender identity thing altogether, either because they are non-binary or because they don’t want audiences coming to the book with preconceived notions. Hilda Doolittle publishing poems as H.D. is an early example of this.

Many authors choose a pen name for privacy reasons. Perhaps they are writing something controversial and fear backlash or even retaliation. Perhaps there’s a professional or community reputation they want to keep separate from their creative endeavors. Perhaps they simply don’t want to be bothered by fans or haters. Everyone seems to be spoiling for a fight these days, especially on social media, so no wonder some people just want to avoid any of that leaking in to their private lives.

In the past, authors with “ethnic” names looking to be better received by British or American readers often changed their given names. Alisa Zinovyevna Rosenbaum became Ayn Rand and Józef Teodor Konrad Korzeniowski became Joseph Conrad.

This is becoming less common today, though some writers still feel their given name is too hard for English readers to pronounce, spell, or remember, so they choose something they perceive will be easier.

The opposite is also true: If you have a common name or you share a name with someone else who is already famous, this is a reason to consider a pen name. This is one of the reasons I would have chosen a pen name if I were to do it again.

I never thought Scott McCormick was such a common name, but I have discovered plenty of other Scott McCormicks out there. (There’s even an author by the name of Scott J McCormick, and his book has gotten lumped in with mine on my bibliography, which doesn’t help either of us.) I was unable to get “my name”.com because a voice-over artist already had it. Nor could I get any of the social media handles, so I’ve had to settle for things like www.scottmccormickonline.com and @ScottsYABooks, none of which are especially great.

And then there’s the length of your name. In the past, having a long name wasn’t necessarily a hindrance, but it is today if you want to use your name for URLs or social media handles. My name, for example, is 14 characters long, and any variation on that just seems endless or useless (Twitter handles, for example, can only be 15 characters long).

Some authors who have created a strong brand name in one genre may want to branch out into another without diluting their brand or confusing their fans. Daniel Handler, for example, publishes adult novels and plays under his given name and children’s books under the name Lemony Snicket.

There’s a lot to be said for creating a pen name that’s unique and memorable, like Lemony Snicket, Dr. Seuss, Trevanian, Mark Twain, or Woody Allen.

In my post, “Amazon Optimization: My Self-publishing Experience,” I mention that authors should think of their books as a product. Taking that analogy further, if you think of your author name as a brand, you will go a long way towards boosting sales and name recognition.

How to choose a pen name

You want something short, unique, catchy, and easy to spell. Easier said than done, you say? Perhaps, but there are some literary techniques and online tools that can help you.

Alliteration — words that begin with the same sound: People love alliterative names, which is why they show up so often in comic books (Lois Lane, Peter Parker, Clark Kent) and why so many actors choose them (Marilyn Monroe, Robert Redford). Some authors were lucky enough to be born with alliterative names (Walt Whitman, Vernor Vinge, Hugh Howey, Margaret Mitchell, Don DeLillo, Rick Riordan, Ken Kesey), but there are lots of examples of alliterative pen/stage names (Daniel DeFoe, Louis L’Amour, Miss Manners, Tom Tomorrow, etc.). I would even consider Cormac McCarthy as an alliteration. Sidney Sheldon is a near alliteration.

Rhythm plays an important role in why we remember names, titles, and phrases. Many memorable names often follow one of three patterns.

There are exceptions to all of these rules, of course. Some longer names can have a mellifluous flow when you get a nice mix of stressed and unstressed syllables (Truman Capote, Lemony Snicket, Cormac McCarthy, Larry McMurtry, Tennessee Williams).

Initials are always good, especially when they feature a nice syllabic flow: T.S. Elliott, J.D. Salinger, S.E. Hinton, E.B. White, etc. Using your own initials can be a nice way to have your cake and eat it, too. You can create a nice gender-neutral brand name while not totally covering up your identity. (Maybe I should have done what my Mr. Pants illustrator did (R.H. Lazzell) and gone with S.T. McCormick.)

If you’re having trouble coming up with ideas, try using a name generator. There are many of them out there (Google it and see), but Behind The Name lets you set a lot of parameters.

The tool that I find the most useful, however, is this wonderful anagram generator. Type in your name (or anything else) and you’ll be hit with dozens of great suggestions that will get you thinking.

Important. Before adapting a name make sure it’s not already taken

Once you have a name…

Once you’ve settled on a name that fits all the above criteria:

Names cannot be copyrighted. This includes your pen name. But you can copyright your book written under your pen name. If you haven’t finished your book, you can still pre-register it with the Copyright Office. Pre-registration is not the same as registration, but it will give you some protection. Learn more here.

You can trademark your pen name, though you don’t really need to, especially if you’ve followed the other steps, like setting up your website and social media accounts. Getting a trademark is an expensive, time consuming, lengthy, and confusing process. But if you really want to, you can learn everything you need to know here.

You need to decide how private you want to be. A pen name doesn’t have to be a secret, it can just be used for branding purposes. If that’s the case, you’re fine with the above protections, but if you really want to cloak your identity, you should read about the legal, financial, and tax ramifications. (Writer’s Relief has a post about that.)

One thing you should probably do is set up a checking account under your pen name as a D/B/A (doing business as). That way you can deposit checks made out to your pen name.

That’s it! Have you used a pen name in the past? I’d love to hear about your adventures in the comments below.

Related Posts
A historical tour of pen names [Infographic]
To Pseudonym or Not to Pseudonym
Build A Creative Business Around Your Book
Trends In Publishing
Amazon Optimization: My Self-publishing Experience