Some of the boldest, most adventurous writing is happening on TV. In this ongoing series, we deliver writing lessons gleaned from our favorite shows airing in the golden age of television.

In the first installment of this series (“Writing lessons from TV, Part I: Rick and Morty“), I listed three lessons writers could learn from the animated “Adult Swim” show, Rick and Morty. This time around, let’s take a deep dive into Rick and Morty’s “Ricklantis Mixup” (S3 E7) episode.

“Ricklantis” also offers up a great example of taking an idea and running with it to absurd conclusions, which was lesson #1 from the first post. One of the central concepts of Rick and Morty is that there are infinite universes, and so there are also infinite Ricks and infinite Mortys. Because these “Ricks” have many enemies throughout these infinite universes, several of them got together and built a secret place where they could hide out and craft their own society. This place is known as the Citadel, and we first encounter it in the season one episode, “Close Rick-counters of the Rick Kind.”

The Rick we’ve been following throughout the series (known as Rick C-137) thought so little of the place, he destroyed it. But it has since been rebuilt, and “The Ricklantis Mixup” (AKA “Tales from the Citadel”) gives us a look at what a city that consists of nothing but Ricks and Mortys might look like, how it might function, and what life might be like for its citizens.

Taking this concept to its limit: A functioning city needs people doing menial jobs; so what happens when those menial laborers are all Ricks — the smartest genius in the multiverse? Can he hack a factory job while another Rick — literally the same person with the same skillset — reaps all the benefits of his labor? What happens when you have an entire neighborhood of teenage Rick-less Mortys who are left to fend for themselves in a city that doesn’t care about them?

Creating three-dimensional main characters is obviously an important skill for any writer. You want your readers (or viewers) to identify with your characters’ struggles and choices as their journeys propel the story. But what often separates the good stories from the stories people obsess over are the minor characters.

Writer Ryan Ridley’s minor characters in “Ricklantis” don’t just serve to move the story along, they — with just a few lines of dialog — suggest a fully fleshed-out world and hint at a deep social order.

For example, once the story settles in to the Citadel, the first lines of dialog we get are from newscasters. This is a common trope; an efficient way to deliver exposition. But rather than just have them tell us about the upcoming election (the overarching storyline) Ridley uses the newscasters to flesh out the social order of the Citadel. These two newscasters look identical, except that one (Rick D716-B) has a scar.

Later, we see a third reporter… 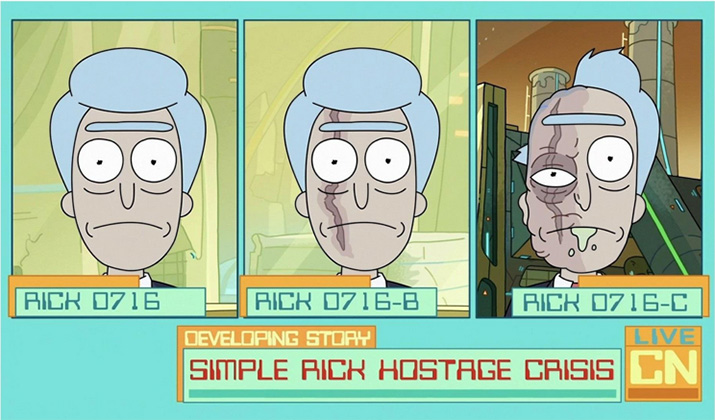 RICK D716-C: … I say appreciate the life you have because it can always be worse. Back to you, Ricks.

On the one hand, these three represent a pretty silly joke: they come from almost identical universes, save for the fact that whatever danger these Ricks faced, they each escaped with varying degrees of damage. But the contempt these three feel for each other suggests a sort of bizarre class struggle. (Note that Rick D716 doesn’t have an A after his name.) Rick D716-B’s desire to kiss up to Rick D716 rather than feel solidarity with Rick D716-C rings so true it gives gravitas to what would otherwise be a throwaway moment.

In another story, Police Rick and Morty are trying to get information about a crime from Store Manager Morty, while Purple Morty sweeps the floor behind him. It’s a scene right out of Law and Order, but look how much Ridley is able to wring from the exchange. 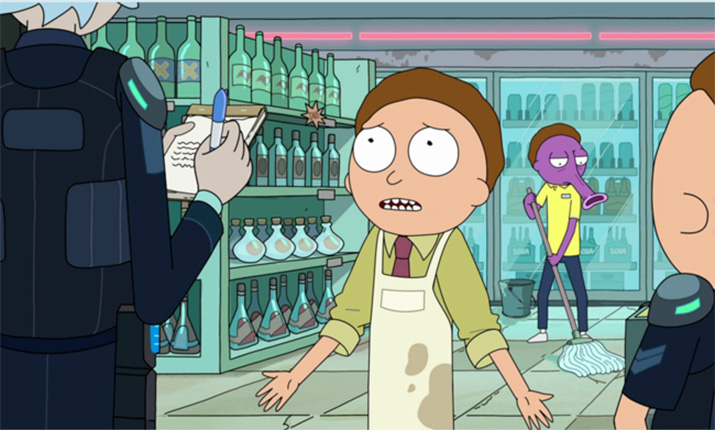 STORE MANAGER MORTY: Put it in your blog!

A whole world of Morty racism and injustice revealed in just two lines! And you can easily imagine the conversation these two characters will have once the police leave.

There are two takeaways from Ridley’s use of minor characters.

Lesson #5: Humor your way through the feels

There’s nothing wrong with writing comedy that’s merely funny or even silly. I like a good, dumb pun as much as the next Firesign Theatre fan. But Rick and Morty shows how humor allows writers to explore the darkest depths of humanity in a way that drama simply can’t.

Angry about capitalism? You could give voice to that anger by writing a dramatic polemic, highlighting the injustices of the system and struggles of the little guy. It might be powerful, but I doubt it would be as compelling or shocking as this:

Not only does humor offer you a way to explore darkness, it can add a dramatic punch to an emotional scene, without wandering into maudlin territory.

That’s it for Rick and Morty, but we’ll be exploring other lessons from more fantastic TV shows in the future.

Part of what makes “Ricklantis” so spectacular is how well it introduces a dizzying array of brand-new characters. We meet 10 major characters in this episode, and there are another 40 who get speaking roles. As if the challenge facing writer Ryan Ridley weren’t difficult enough: literally every single character we meet is a Rick or a Morty. Even better: other than the “Simple Rick” commercials, Justin Roiland voices every single character in the episode.

P.S. Although “Ricklantis” is my favorite Rick and Morty episode, if you’re new to the show, I don’t recommend it as your first foray. At least watch “Close Rick-counters of the Rick Kind” first.

Writing Phone Conversations to Forward Your Plot and Draw Your Characters

The Seven Steps Of Book Sales To Non-Retail Buyers