If you ask me, Scrivener for iOS is a must-have app for writing anytime, anyplace. Want to know why? I’m so glad you asked…

Travel to a forum like NaNoWriMo’s and you might find questions like, “Do I need Scrivener for iOS? Is it a good app for writers? Why not just type away in a notepad (or similar) app?”

I’ll say right from the start, I think Scrivener for iOS is a great app and a must-have for any writer or blogger who wants to be more productive and organized. In fact, Scrivener for iOS is one of the most beautiful apps I’ve ever seen. It has a minimalistic interface and offers a full-featured desktop experience, providing all the Scrivener features on the go with your tablet. Check out how Scrivener for iOS works and looks in this video:

In the more detailed Scrivener for iOS review below, I’ll dive into the features and benefits so you can decide for yourself if you need this app or not. I like that I don’t have to be chained to my MacBook and can work on my book or blog from home using only my iPad. It’s a dream came true for me.

How I survived without Scrivener for iOS

In short, badly. While waiting for Scrivener for iOS, I had to make due with other apps on my iPad when I wanted to write on the go (especially in my travels). I used Evernote to quickly scratch out my ideas and inspirations, and I still use Evernote for this whenever I get an idea for a new article – I guess some old habits really do die hard.

Scrivener for iOS review, app on the iPad with projects view

For some time, my main app for writing was Textilus. It was really great, with so many useful functions for the low price. I especially like the app’s text highlighting, options for selecting a background color, various fonts, Dropbox syncing, and customizable keyboard rows. That’s right, Scrivener hasn’t started a revolution with their virtual keyboard row, I’m pretty much sure Textilus was among the first apps to feature it. 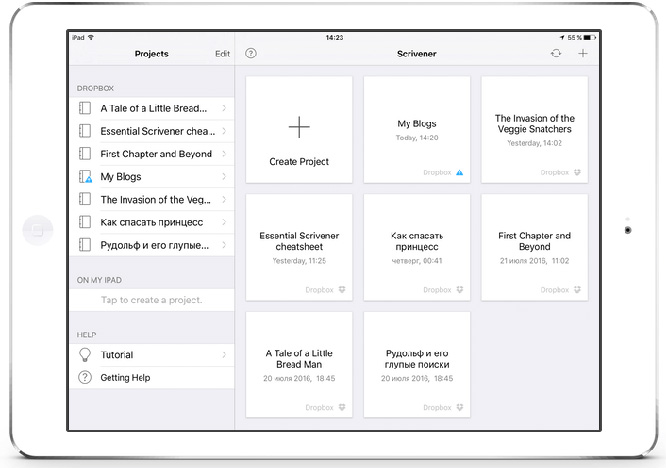 But, after a year, I started experiencing issues (the app kept crashing on me), and I eventually removed it from my iPad. That left me with Pages and Evernote. As I mentioned, I usually use Evernote for quick notes for ideas on the go or collecting research from the web – Evernote’s ability to create an article out of any web page and send it to your account is amazing. But as a writing app, Evernote only offers basic formatting options and is very slow on my iPad 4.

In regard to Pages, it’s great for laying out your document, but writing in it is like writing in Word. It just doesn’t feel right to me.

Why Scrivener for iOS is so great 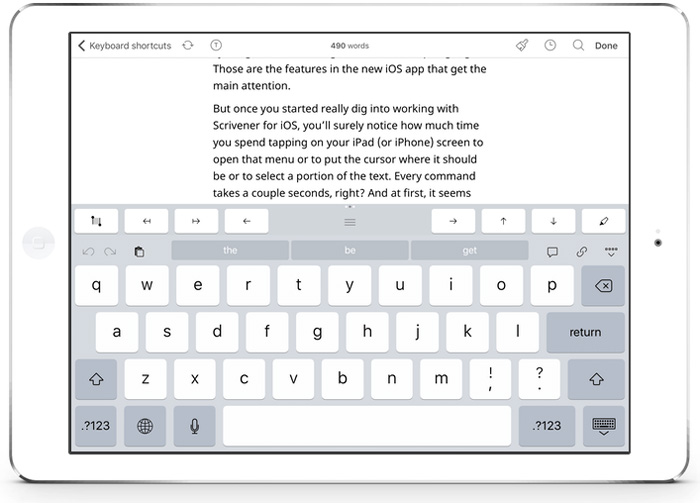 For me, this app is an obvious choice. It helps me maintain an organized and productive workflow without having to compromise on anything, and I can write anywhere, anytime. I recommend the mobile version of Scrivener even if you don’t have Scrivener for desktop – it’s a full-featured app all by itself.

What major desktop features are missing in Scrivener for iOS? 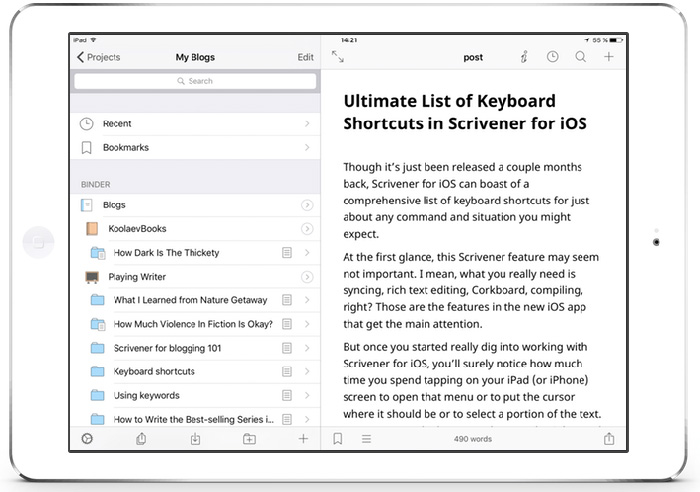 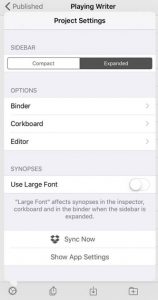 How much space does Scrivener take on your iOS device?

I checked my iPad and found out that Scrivener takes about 140 Mb. Note that I don’t use images in my projects for research (I store the majority of my research in Evernote), though I have a project for my fantasy book series, How To Save A Princess which contains more than 300,000 words.

Also, you should consider how much space your Scrivener projects take in Dropbox. Mine is 120 Mb, plus I store automatic backups in a separate folder of 809 Mb in total. But the backup isn’t downloaded to your iPad, so no worries (and to this day, I’ve thankfully never needed to use it).

By the way, I’ve written a tutorial on how to set up automatic backups and store them in Dropbox.

Good luck with your writing on the go!

This post originally appeared on PlayingWriter.com. Reposted with permission.

Related Posts
Scrivener For iPad And iPhone Is Here
Eight Online Writing Tools To Help Liberate Your Inner Writer
Humans Vs. Robots: When (And Why) You Should Use Editing Tools
7 Ways An Algorithm Can Help You Write A Better Novel
Seven Writing Tips To Increase Your Productivity
The Jungle Book: Beautiful Film, Flawed Storytelling