Writing is not just sitting, typing everything on your mind. Before you set out to your work, you ought to know a bit of theory, including the concept of focalization.

Focalization is one of those concepts that every writer should be aware of, though it’s quite convoluted.

Focalization refers to the perspective from which a narrative is presented. Different characters have their own perspectives of story events, and readers’ perceptions of events in the story are limited to those of the focalizer. Thus, focalization is used to provide the perspective on a story.

This term was introduced by Gérard Genette, a French literary theorist, in order not confuse it with another literary term: narration. There’s an easy way to tell one term from the other: Narration is what’s told, and focalization is what’s seen.

According to, Genette, there are three types of focalization:

1. Zero, the one who knows more than any of the characters; use it to provide readers with as much information as possible.

2. Internal, which can be of three types:

3. External, readers don’t have access to the character’s thoughts; use it to intrigue readers and make them suspect your characters of something.

Narrators can be of the following types

Readers easily get used to the idea that everything told in the story is credible and trustworthy. And yet that’s not always the case because there can be a tricky type of narrator, the unreliable one. There are different reasons why an author might make a narrator misleading. Some characters are villains, who do their best to fool readers and lead them down a false trail. However, characters can also just be unable to provide readers with objective information because they are naive, insane, unaware, or mistaken. Or they just can be show-offs and pretenders who exaggerate their merits and want to be better than they are in reality.

A narrator’s unreliability is sometimes obvious, but can also be largely hidden, with only slight hints that there’s something amiss.

If you’re writing crime fiction or suspense, unreliable narrators are useful tools to intrigue readers. They can ensure that readers stay intensely involved in a story so that at the end, when they finally learn how the narrator deceived them, they will likely say “Wow! I wasn’t expecting that!” This is why readers are justified in being skeptical towards narrators.

A few examples of unreliable narrators:

I came across the chart below at Screenplayology, and have used it to demonstrate the difference between narration and focalization and the way they interplay. 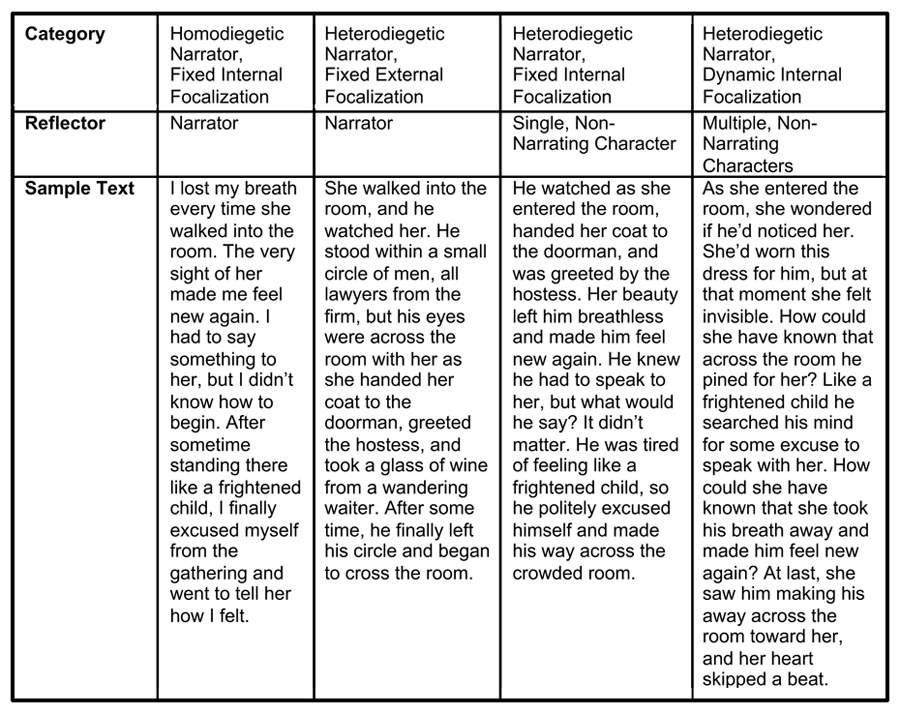 Genette is not the only writer to address focalization; many modern scholars pay heed to this notion as well, though, they mostly base their studies upon Genette’s theory. Neil Randal, an Associate Professor at the University of Waterloo, presented his article “Shifting Focalization and the Strategy of Delay: The Narrative Weaving of ‘The Fionavar Tapestry’“, where he wrote:

Focalization, furthermore, has an advantage over focus (which carries similar photographic connotations) because focus is usually followed by the preposition upon while focalization, at least as Genette has established, normally takes the preposition through. When we write of a narrator focalizing through a character, we clearly distinguish who sees from who speaks. Of course, the term focalization does not adequately address the problem in narratology of the visual metaphor, but even in this regard it out-performs both point of view and perspective.

Seymour Chatman, a film and literary critic and professor of rhetoric at the University of California in Berkeley, also mentions Genette in his work Characters and Narrators: Filter, Center, Slant, and Interest-Focus:

Genette has always seemed to mean more by focalization than the mere power of sight. He obviously refers to the whole spectrum of perception: hearing, tasting, smelling, and so on. What is not so clear is the extent to which he means it to refer to other mental activity, like cognition, and to functions other than mental.