In terms of dollars, US eBook sales have gone up in the past year. What’s more, indie-published titles are on the rise in terms of market share, placement as top sellers, and sheer volume of published work. From “February 2016 Author Earnings Report: Amazon’s Ebook, Print, and Audio Sales” on the Author Earnings website:

“The most important graph for authors shows the rapidly diverging rate of ebook author income by publishing path. The Big 5 publishers are now providing less than a quarter of the dollars earned by creatives for their ebook sales. Indies are taking close to half. As detailed in previous reports, higher prices and other missteps are a likely contributor to this accelerating trend, but the reality may be that major publishers simply are finding it difficult to compete with indie authors on diversity, price, quality, and frequency of publication, as this divergence has been increasing for the last two years — well before the Big Five’s return to no-discount agency pricing.” 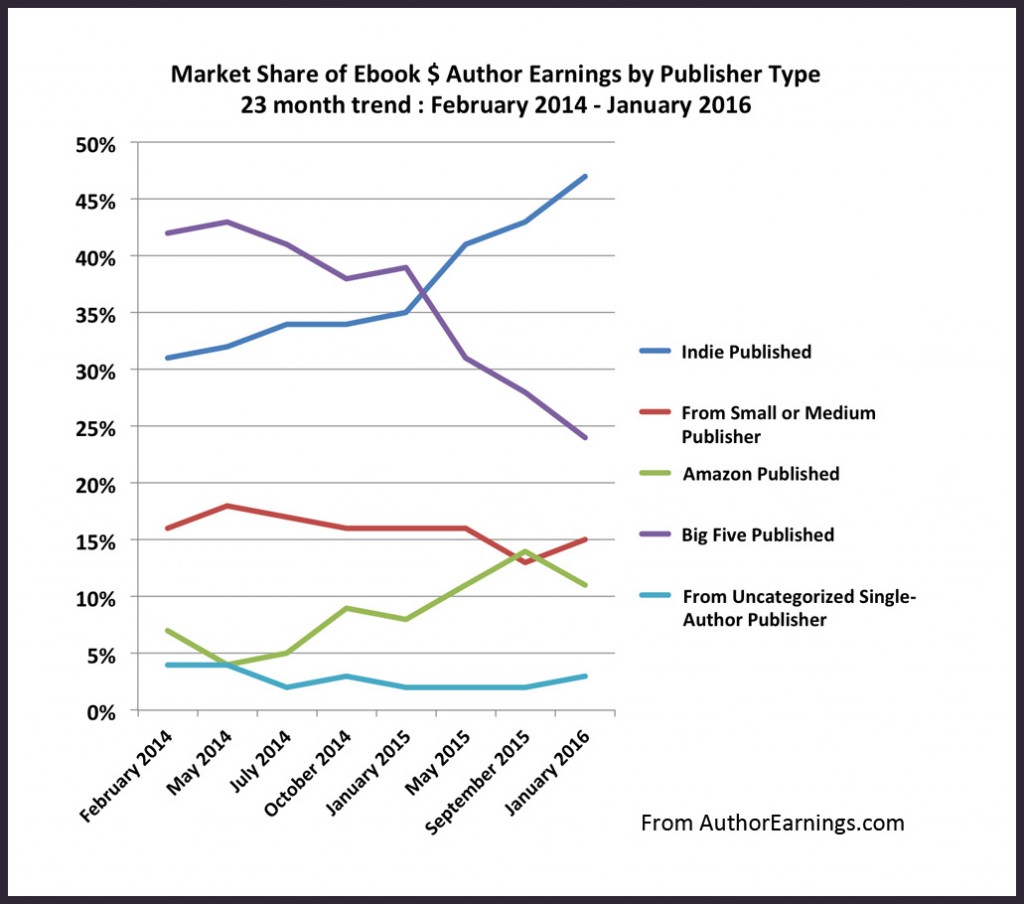 The entire article is worth the read, and provides hard evidence that independent publications have staked their place in the market, and how.

Amazon has implemented a new policy that will flag Kindle eBooks with a warning, what they are calling CFQIs (Customer Facing Quality Indicators), to indicate an eBook contains errors. The reason, it seems clear, is to protect the buying public from spending money on a title only to find it’s riddled with typos and other issues that render it unreadable or unsatisfactory. The concern among authors, particularly self-published authors, is that they’ll get pegged with a warning sticker for a handful of errors, or worse, for the use of made up words, names, and objects created for worlds they’ve invented.

“No, Amazon Will Not Penalize Your Book for a Typo” posted on the Words On Words blog, provides this handy list regarding what offenses Amazon will be flagging for, which include:

as well as the things Amazon will ignore:

Amazon has also indicated that for a typical novel, 15-20 typos will trigger the warning. From the Amazon Kindle Direct Publishing (KDP) page comes this: “The combined impact on the reading experience of a book with excessive Distracting or Destructive Issues can lead to the book being removed from sale until the corrections are made. A moderate amount of Distracting or Destructive Issues can result in the book remaining available for sale, but with a temporary quality warning displayed on the detail page of the book on Amazon.com until corrections are made.”

Note that is says “temporary” in regard to the warning. Authors with content earning a flag will be notified and have the opportunity to correct the problems and remove the warning.

Last November, President Obama signed a bill into law which put a 10-year term limit on the position of Librarian of Congress, a position which had basically become a lifetime appointment.

“Obama Nominates Carla Hayden for Librarian of Congress,” on the Publisher’s Weekly website, states: “President Obama today announced Carla Hayden, CEO of the Enoch Pratt Free Library in Baltimore, as his nominee to become the 14th Librarian of Congress. The selection comes after months of speculation, following the January retirement of James Billington, a Reagan appointee who took the post in 1987. If approved by the Senate, Hayden will replace associate director David Mao, who is currently serving as the the library’s interim director.”

If approved, Hayden will inherit a department harshly criticized for its failure to keep up with advances in technology, as well as a movement to remove the US Copyright Office from under the authority of the Library of Congress, which has had oversight of copyright functions since 1870.

Read More
Book News: Indie Publishers And The Amazon Bottleneck, 1,001 Tips, Writing Contests, Ales And Books
Book News: Amazons’ Brick & Mortar Store, The Sheepover Gets A Deal, Into The River Gets Banned In New Zealand
Do You Get A 1099-Misc Form As A Bookbaby Author?
Your ISBN: Answers To Frequently Asked Questions
Judging A Book By Its Cover: What Book Publicists—And Media—Want To See On The Outside Of A Book