From outlining to sticky notes to just writing the darn thing, the writing methods and process of completing a novel will differ from writer to writer.

Completing a novel is a major accomplishment for any writer, and every novelist has his or her own writing method. From outlining to sticky notes to just writing the darn thing, the process of completing a novel will differ from writer to writer. For novelists out there struggling with their current writing method, or those embarking on their first book, look these over – you might find a process that works for you.

Outlining: the very word causes some writers to break out in hives. Others can’t live without them and they refer to their outlines every time they write. Outlining a novel does not look the same for every writer: it’s the rare few who use Roman numerals, capital letters, numbers, and lowercase letters as we all learned in high school with

Lynn Viehl, who has written 42 novels in five genres, writes about outlining novels in “Novel Outlining 101” on her blog, Paperback Writer. She gives several examples of outlining a book by chapters and then outlining a chapter with scenes.

Most writers, who use outlining, swear by it, and they usually write an outline that looks something like this:

Sometimes with outlining, people get hung up creating the outline and being rigid about the format, which can gum up the writing process. If this describes you, you may benefit from using chapter summaries, instead. As an added benefit, these summaries can be adapted to become chapter descriptions for your novel synopsis, which you might need if you’re pitching to an agent or editor when the book is finished.

Here is an example of chapter summaries from the beginning stages of my young adult novel, Caught Between Two Curses (Rocking Horse Publishing, 2014):

Prologue: Newspaper report of Julie’s parents and her in the car accident. She survived and went to live with her aunt. A quote from Grandmother so everyone knows she exists, but she is strange.

Chapter One: Julie is in the kitchen with Aunt Lizzie and little cousin Stevie. She gets a phone call from Debbie Winters, The Mona Show producer. They want to interview her for an update show and plan to send a satellite crew to her house in a few days. Julie doesn’t want to do it for a variety of reasons, such as hates her teeth and she sweats too much, and she just wants to stay out of the limelight and live her life. She recently broke up with her boyfriend, Gus, after two years because she wouldn’t sleep with him. She loves Katherine Hepburn, as her mother did.

Tactile learners learn best when they can manipulate items and experience activities and events. Tactile writers are similar in that they need to physically manipulate their stories. Sticky notes and note cards work for these writers because they can physically flip through their ideas, change their order, and literally throw them away while they work on completing a novel. 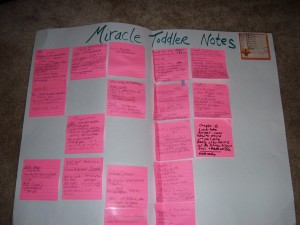 For example, let’s say you are writing a mystery novel. You’ve determined the crime, clues, red herrings, and how the case is solved. You can write each of these ideas on index cards or sticky notes, so you can change the order of events with a flip of a card or a new arrangement of sticky notes. Once these note cards are filled out, you can create cards for transitional events. Then put the two stacks together in the order you think the events, clues, and red herrings will appear in your mystery novel. The index cards become like a living outline, guiding you through your story.

This photo shows my sticky note system for my young adult novel. Each main character has sticky notes listing features, hobbies, names, and relationships. Events in each of the chapters are also listed on sticky notes to easily find information for later references and to keep track of what has already happened in the story.

Some novelists begin with their characters and setting. Ellen Hopkins, popular young adult author of books written in verse such as Crank and Identical, believes character is everything for her and her stories. In her pre-novel phase, she spends as long as two months, thinking about her characters. “My process probably seems inefficient,” she said. “Many top novelists write in a similar way, including Stephen King, Richard Peck, and others.”

Some writers will fill out pages and pages of questions on their main character’s background, likes and dislikes, history of romantic relationships, and fashion sense. When these novelists put pen to paper or fingers to the keyboard, they know their characters better than they know themselves.

Hopkins has a similar process. “Mostly, it’s in my head rather than on paper… I do not know what they eat (unless they have an obsession or eating disorder) or what they watch on TV,” she says. “I do know how they view their little piece of the world and why. What in their past created their present?”

Some writers will start with a setting, a place they really want to write about, and research as much as they can about that city, state, or country until a story pops out. They may have pages and pages of notes about their setting to work into the novel’s plot. In these books, the setting becomes another character—the story couldn’t happen anywhere else.

If you want to try character sketches before you start your novel, here’s a place to start:

You can continue this chart for your character study, and you can also write a character description in paragraph form. The bottom line is you have to find the method that works for you.

Some novelists make just a few notes before they start writing. Then they write the whole novel, leaving blank spots if they need to do research or get stuck on a plot point. They forge through to the novel’s end like a hungry mole tunneling through the ground. Just finishing the novel is important for the writer, and then they go back, revise, and rewrite, rewrite, rewrite.

Tricia Sanders, freelance writer who blogs on “The Literary Ladies,” has participated in NaNoWriMo for several years. NaNoWriMo is for writers who want to challenge themselves and dedicate a month to starting and finishing a novel.

“Before NaNo starts, I create a spreadsheet and determine how many days I can write,” she said. “My goal is usually 2,000 words per day. But I really try to get in extra words at the beginning of the month. Each day, I look at the spreadsheet and see where I’m at in relation to where I want to be.”

Sanders equates this process of novel writing – forging through to the end – with housecleaning. When she cleans house, she might stop to organize a closet and lose sight of the fact that she wanted to clean her house. Hours later, she has one closet organized and a dirty house. When writing a novel if she goes back to fix scenes, then she doesn’t finish her novel. She may have a perfect scene, but she can’t send that one scene into an agent. She needs a complete manuscript.

“I do have to say that NaNoWriMo provides me with the motivation I need to keep writing,” Sanders said. “Because I don’t go back and edit [during NaNoWriMo], I don’t get stuck nearly as often.” She doesn’t fix spelling or grammar even – she just keeps on trucking to the end.

So, what are you waiting for? You’ve got your idea, you’ve completed your research, and now, it’s time to pick a method and get started writing your novel! Remember, the best writing process for you is the one that makes you actually write your novel.

Read More
The Opposite Habits of Famous Authors [Infographic]
4 Tips For Writing Children’s Books
From Blog To Book – A Sensible Approach To Completing Your Book
Finishing Your Novel: How To Know When You’re Done Writing Your Book
10 Writing Exercises To Break You Out Of Your Creative Rut