Hybrid authors walk the line between traditional and self publishing by doing both.

It’s a question that thousands of potential authors are asking themselves everyday:

Should I try self publishing?

Or should I chase the dream of traditional publishing.

One answer is: do both! You’ll be hearing and reading a lot more from BookBaby about authors who do both traditional and self publishing. They’re called “hybrid authors” and they’re some of the most successful authors around today!

But if you’re just starting your publishing journey, you have to start with one or the other. It turns out I’m going to be speaking to a lot of writers trying to make this decision at the Storytellers Conference and Expo in Santa Rosa, CA. I’ve been searching for the easiest and best way to get my point across. And I think I’ve got it.

My explanation is actually three sets of numbers that best illustrates the road you should take, starting with $24,480 vs. $5,242.

This first comparison is borrowed directly from a presentation by Dana Beth Weinberg at the recent 2015 Digital Book World conference. Her points are so spot on that I’m compelled to present it as is and give her all the credit for this! Dana’s comparison looks at two different writing scenarios that take approximately the same timeframe.

She could decide to write and self publish four short books or novellas at 25,000 words each. Assume she charges $2.99 for each. With a 70% royalty rate enjoyed on Amazon, she would stand to make a little over $2.00 on each sale.

For both writing scenarios, let’s assume Dana has 3,000 fans who will buy everything she writes. Here’s her slide illustrating the side-by-side comparison: 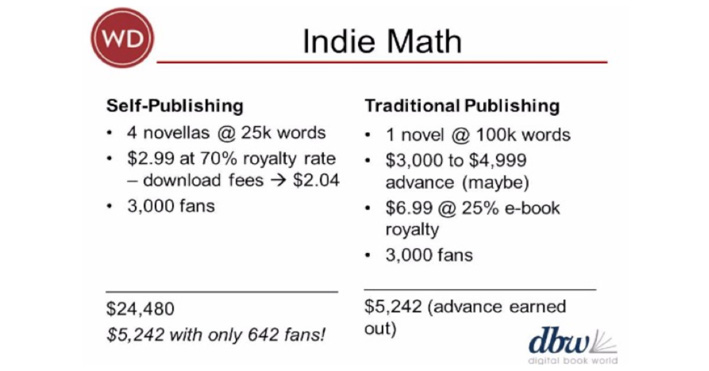 As you can see, these numbers give self publishing a huge edge – she’s able to equal 3,000 sales from traditional publishing earnings with sales of just 642 books.

Skeptics might point out how difficult it is for self published authors to find those 3,000 devoted fans, and they’re exactly right. But the same can be said for traditional publishing! Like it or not, it’s nowhere near a given that a new author will be provided the necessary marketing and promotional muscle to find those readers. Only top-of-the-list authors are commanding this kind of support nowadays.

There’s one other factor not considered in Dana’s comparison that gives an entirely new dimension to her self-publishing earning power. That’s in our next set of numbers:

Those are the average number of months it takes for self published (2) vs. traditionally published books (20) to come into the marketplace.

Once your manuscript is finished and you elect to self publish, you can expect to see your book it in all the online retailers like Amazon, Barnes & Noble, and the rest within two months. And that includes the standard time needed for a thorough professional editing job.

Meanwhile it can take somewhere between 18 and 24 months for your book to see the light of day at the end of the traditional publishing process. (Of course that’s assuming you’ve already completed the time-consuming task of finding both and agent and publisher willing to take you on as a new author. That alone could take months or even years!).

Never has the axiom “time is money” been truer than in publishing. Think back to Dana’s comparison – just think of the additional novellas she could be publishing in the 18 months difference. It’s a slam dunk that her earnings would be 2x to 3x more as a result.

Speaking of slam a dunk, that’s the essence of my final set of numbers to help guide your choice:

Unless you have the next 50 Shades of Twilight Hunger Games as your first manuscript, your efforts to be “discovered” by traditional publishing face long odds. For some of the most successful authors it took years to find agents and publishers willing to give a rookie author a shot. Traditional publishing is adapting much the same mentality of Hollywood in green lighting films – they want a sure thing! That’s why there will surely be a “Fast And Furious 28” in the years ahead. The Big 5 publishers can’t afford the risk of new, untested authors.

For many new authors, the fact is that they will never come close to a traditional publishing deal. Even the most optimistic outlook would put the average writer’s chance at landing a deal at five percent.

Meanwhile, self publishing is a sure thing, the proverbial slam dunk. Once you’ve made up your mind to go this route, it’s a certainty your book will be available to millions of potential readers. There’s nothing stopping you from reaching your goal.

All these numbers add up to one thing: self publishing is the best route for today’s new authors. So get that book finished soon and join the millions of writers who have made the journey.

Related Posts
How To Improve Your Writing (By Not Writing)
Radical Revision: Four Ways To Blow Up And Rebuild Your Novel
Make Peace With Your Inner Plotter And Pantser
Abandon Your Draft And Become A Writer
10 Perfectly Normal Struggles When Writing A Novel [Infographic]
Let Your Story Reveal Itself To You