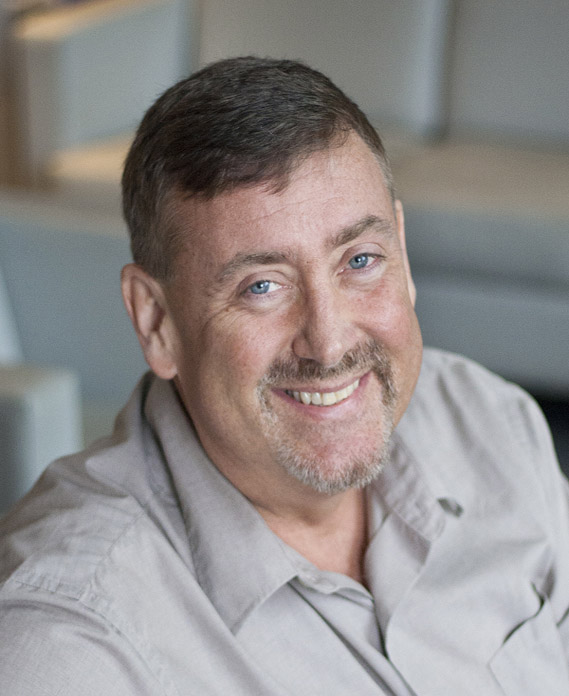 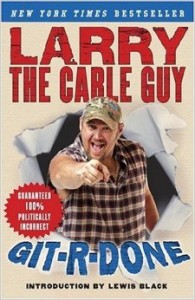 For my first post in the new year, here’s a little story for anyone who has yet to publish a book:

A failed comic strip artist, a faux cable repair guy, and you walk into a bookstore.

OK,OK…so it sounds like the start of a bad joke. It isn’t, I assure you. Just stay with me:

The comic strip guy, Jeff Kinney, goes to the children’s book section and sees an entire shelf of his “Diary of a Wimpy Kid” series. The books already look well used; probably dozens of kids have already thumbed through them without buying.

The cable guy – otherwise known as comic Larry the Cable Guy – walks to the comedy book section. Near the shelf full of Dave Barry, Tina Fey and even Grumpy Cat he finds a single dusty copy of “GIT–R-DONE”, his 2006 New York Times best seller. (Yes, really.)

As for you….well, that’s where the story ends. Because your book isn’t on these — or any other — shelves. Because you’re not an author. At least not today.

Every time the calendar rolls over and adds a digit, the media is full of all kinds of New Year Resolution type of stories. ‘Tis the season for all kinds of motivational posts. “Find that new love of your life.” “Get that new job you’ve always dreamed of!” And of course, “Lose the 25 lbs. you’ve resolved to lose the last 10 years.”

So let me add one more: Get your book done in this still very New Year. Now is the time. Or should I use the well used refrain from our friend Larry above? He certainly heeded his own advice.

Larry — aka Dan Whitney — catapulted to celebrity on the Blue Collar Comedy Tour as his stereotypical “redneck” character helping him to land movie roles like Tow Mater in Pixar’s Cars. Adding it all up – from movies, his own TV show , DVD sales, stand-up performances, and a lucrative deal shilling for Prilosec  – he earned $18 million between May 2011 and May 2012.

He also found time to write his book!

For those writers still laboring for years on their manuscript and close to giving up hope: Consider the career of Jeff Kinney and his Wimpy Books. He couldn’t land a cartooning job after college, spending three years sending out submission letters and getting nothing but rejection for his strips. He took a day job designing online games, but on the side started writing and illustrating “Diary of a Wimpy Kid.”

And he kept working and working on his book project. For eight long years he tinkered with the manuscript before getting up the nerve to show it to a publisher in 2006. Since then his career has been anything but wimpy. To date he’s sold over 150 million books across the globe.

Why? Because he finished the job.

If you need encouragement from lesser known authors, consider the words from two people featured in this blog over the last few months. I asked both the questions I use to conclude every interview: Tell me about the best decision you’ve ever made about your writing career?

“The best decision I made about this book was to release it publicly,” said Shannon McLay, the financial advisor-turned-author I interviewed late last year: “I sent the manuscript out to friends for feedback and they thought it was pretty good. But I still remember to the very end, that feeling of ‘don’t hit send’ when i was uploading it to BookBaby. I still had the idea i should keep it to myself. That moment when you decide to publish it is scary because you’re really exposing yourself in a different way.”

“There’s that supposed quote from (famed novelist) Tom Clancy when he gave advice to up and coming writers. He said something along the line of ‘Just write it,’ and that’s kind of my thing,” said McLay. “I tell people if they have an idea, just start writing it and see what happens. People think doing a book is overwhelming and it really isn’t. It doesn’t have to be War and Peace. Just start out by communicating one strong thought, and then another and then another.”

And here’s what Oya Thomas, a writer/musician said about her best decision. “Without a doubt it was simply completing the book, getting it done,” said Oya when she sat for an interview for my recent post. “You have these things that live in you, these ideas and expressions. You have a choice to either share them or not. Are you going to waste the opportunity to spread these important thoughts or are you going to do something with them.”

“For me finishing my book was the difference between having tears of joy in completing this work versus tears of regret.”

You won’t regret it!

Can You Make Millions Selling 99¢ Books? Amanda Hocking Did.

The Coronavirus: The Elephant In The Room

Make Inroads Into The Homeschool Market