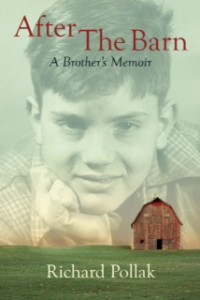 Richard Pollak has an impressive resume: author of The Creation of Dr. B: A Biography of Bruno Bettelheim; The Colombo Bay, an account of his five-week voyage on a container ship after the 9/​11 terror attacks; Up Against Apartheid: The Role and the Plight of the Press in South Africa; and The Episode, a novel that deals with epilepsy.

He’s also been a contributing editor of The Nation, associate editor at Newsweek, written for Harper’s, The Atlantic, The New York Times Book Review and others, served as a Poynter Fellow at Yale University, and taught at NYU.

But despite his considerable writing talents and his deep history with the publishing industry, he couldn’t find a publisher for his most recent book, After the Barn: A Brother’s Memoir.

According to THIS story by Michael Miner for The Chicago Reader,  Pollak even had a number of editors and agents who loved the manuscript turn down After the Barn — because the industry, especially for memoirs, had “tanked”:

“Most passed without comment,” he said in an e-mail. “Others passed, too, but said nice things, e.g., ‘I read and was very moved by your memoir. You, of course, write beautifully . . .’ (Nan Talese, Doubleday) and ‘I have read fifty pages so far of your memoir. What I have read is beautiful and very sad—and I do plan to go on reading. But what I do know is that Nation Books is not the imprint for your book . . . . I write this completely under the spell of your haunting prose’ (Carl Bromley, Nation Books).”

After a while, Pollak’s wife encouraged him to just put it out himself — serializing the book chapter-by-chapter on his blog, as well as publishing it through BookBaby in both eBook and print format.

Of Pollak’s new foray into the self-publishing process, Miner says:

I like to write about authors who publish their own books because once upon a time writers who turned to vanity presses were generally held—certainly by me—to be charlatans and ninnies, and it is necessary to eradicate that stain. It’s necessary because self-publication has become not merely the only option to that bottom drawer but an attractive auction. It’s quick and inexpensive, and the results can be very handsome. And because shabby commercial compromises don’t have to be made, self-publication guarantees that the book that appears is the book the author had in mind in the first place (for better or worse). For those terms, writers are increasingly willing to pay a price: no advance and no promotion you don’t drum up on your own.

“Book Baby also keeps tabs of my earnings,” Pollak mentioned, “which I can monitor just by logging into my account. Compare all this to the business model of the past, where the publisher gives you 15 percent of hardcover sales and 7 percent of the paperbacks.”

Seventy percent of $4.99 is pretty comparable to 15 percent of a hardcover price upwards of $20, except that publishers couldn’t imagine a lot of readers paying upwards of $20 for Pollak’s unhappy memoir and turned it down, so the comparison’s meaningless.

To read the full story, check out Michael Miner’s article about Richard Pollak on the Chicago Reader’s website.

To publish your own book today — check out BookBaby, the largest eBook distribution network available to independent authors.