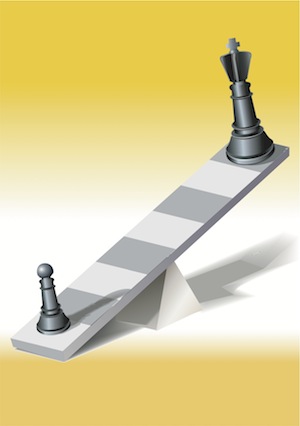 [This article was written by guest contributor Lynda McDaniel, co-founder of The Book Catalysts.]

Have you ever coveted a cozy writer’s garret where you could create brilliant bestsellers in long, uninterrupted writing sessions?

Well, don’t. That fantasy can ruin your chances of becoming a successful author. Here’s why:

1. As long as you think that’s what it takes to write a book, you’re less likely to write.

“Oh, I don’t have time to write today,” you tell yourself because you don’t have several hours to spare. Or “It’s just too hectic to write today.” Excuses like these feed the procrastination beast, which seems to have an insatiable appetite.

2. Uninterrupted periods of writing can cripple your creativity and productivity,…

… according to Benjamin Nugent in the New York Times (February 2, 2013). He learned this the hard way while enrolled in a master’s program in fiction. Nugent isolated himself in a prairie town with no Internet, no TV, no iPhone so he could produce great literature.

“The disaster unfolded slowly,” he writes. “The professors and students were diplomatic, but a pall of boredom fell over the seminar table when my work was under discussion. I could see everyone struggling to care. And then, trying feverishly to write something that would engage people, I got worse.”

He explains that when writing well was his focus, the quality of his work became the measure of his worth. As a result, he couldn’t judge whether his latest draft was good or bad. “I needed it to be good in order to feel sane,” Nugent adds. “I lost the ability to cheerfully interrogate how much I liked what I had written, to see what was actually on the page rather than what I wanted to see or what I feared to see.”

So take heart if you can’t create a distraction-free environment. You don’t want one!

3. You don’t need to write for hours.

It takes only 40 minutes a day to start—and finish—your first draft. Sure, you’ll need several months at that rate, but you will finish because this amount of time is doable for just about anyone. Forty minutes is 10 or 15 minutes longer than studies such as the Pomadoro Technique, but according to researcher Pierre Khawand at
People-OnTheGo in San Francisco, those extra minutes are magic. “My belief,” Khawand writes, “after working with thousands of people on productivity issues and challenges is that … after 30 minutes of focused work, the ‘engine’ is now fully warmed up and functioning optimally, so those extra 10 minutes are ‘pure’ performance. Those 10 minutes are all in the high-potential area. We must grab them while we can.”

4. Instead of long slogs or occasional spurts, regular writing sessions keep your creative brain on alert.

The pick-up/put-down method of book writing tends to dilute the brain’s focus. When the brain is primed by writing regularly, your “idea factory” continues working while you do other things—like having coffee with a friend, stirring the soup, or walking the dog. Ideas seem to pop into your head out of the blue.

5. The specter of long sessions can lead to long periods without writing,…

… which leads to lost continuity and playing catch-up. Again, that pick-up/put-down method requires you to repeatedly find ways to reengage in the process. But when you write regularly, you’re in touch with your work in progress.

6. As little as 10 minutes can be productive.

In addition to writing a few sentences of copy in your manuscript, you can accomplish a lot in 10 minutes. Here’s a sampling:

Brainstorm: book and chapter titles; subheads; dynamic verbs to replace a couple of flat ones; names of people to use in your anecdotes, case studies, and stories, and idea for sidebars.

Plan: your calendar and block out available writing times in the next 30 days, note the experts you need to find for backup information, do a computer search to verify an essential fact or two you’ll need in a future section.

Ponder: your project with your eyes closed, perhaps focusing on a dilemma—describe it to yourself, define it, and invite the answer in. Then open your eyes and go on with your day, open to fresh solutions and ideas.

For every subhead you brainstorm, list you make, or fact you verify, you’ve saved yourself a few minutes later on. Besides, no matter how much or how little you get done in a few minutes, you’re keeping your creative brain primed—ready and raring to go to the finish line.

###
Bio: Lynda McDaniel is the co-founder of The Book Catalysts (www.bookcatalysts.com), offering book coaching, manuscript editing, and the on-demand book-writing course “Catapult into Your Book!” (http://bookcatalysts.com/writing-class )

Sell your book through the world’s largest distribution network for independent authors.