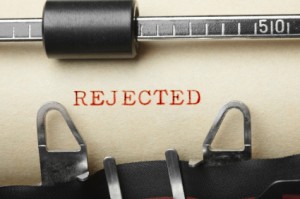 Why persistence can pay off in the publishing world

I like Todd Boss‘ writing. He’s a little like Kay Ryan, only male and midwestern. His poems, like Ryan’s, are compact, playful, filled with internal music, and demand as much of themselves as they do of the reader — which I guess is my way of saying they strike me as the best sort of “accessible” poems.

On top of enjoying his poetry, I was also happy to discover that he seems like a really nice guy. I met him briefly last year at the Printer’s Row LitFest in Chicago just before he gave a reading — and he even took a request. Anyway, I digress…

Dealing with rejection as a writer

A few months later, Todd posted this photograph on his Facebook profile of twelve rejection letters he’d received from Poetry Magazine over the years: 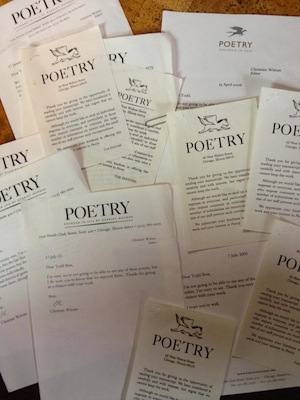 In all likelihood, they probably told him “no thanks” a few more times in between some of those yeses, but you get the point. A door opened. A door that he’d banged his head against twelve times. Most folks would’ve given up by then, but his persistence paid off. One of three things had happened:

1) He hadn’t been ready for publication during those earlier years, but over time his writing reached a level where the editors took notice.

2) He’d always been a good poet, but needed to “make a name for himself” by publishing in other journals and magazines first.

3) Poetry Magazine receives 100,000 submissions per year, and the changing needs of the magazine, the tastes of the editors, and the style/voice/work of the poet finally aligned.

But no matter what explains those rejection letters, there’s a common factor in all three of the scenarios above which explains the acceptances: he’s a good poet.

For talented writers struggling to find an entrance into the world of publishing, the lesson is both simple and profound. As Todd Boss says, “Don’t give up, friends. Never give up.”

You’re a writer; rejection is a professional hazard. But if you need a little encouragement to help you make the most of your rejection letters, check out our article Dealing with Rejection as a Writer.

Also, see Todd Boss’ article How to Land a Publisher (in 7 simple steps).

How do you deal with rejection?

How do you move past rejection and criticism to keep writing and submitting work? Let us know in the comments section below.

Virtual Book Clubs In The Era Of Social Distancing