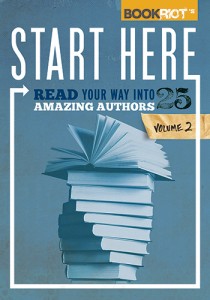 Crowd-funding for authors and publishers: an interview with Clinton Kabler of BookRiot.com

The folks at Book Riot raised enough funds to put together Volume 1 of their Start Here: Read Your Way Into Amazing Authors series through a Kickstarter campaign.

Now they’re launching a Kickstarter campaign for Volume 2, letting financial backers direct the contents of the book itself — and we thought it’d be the perfect time to ask them about the intersection of crowdfunding and book publishing.

Here’s an interview BookBaby‘s Jim Foley recently did with Clinton Kabler, COO of Riot New Media Group, the folks behind the “Read Your Way…” series:

Launched in October 2011, Book Riot is a community dedicated to the idea that writing about books and reading should be just as diverse as actual books and readers are. So sometimes we are serious, and sometimes we’re silly. Some of our writers are pros. Many of them aren’t. We like a good list just as much as we like a good review. We think you can like both J.K. Rowling and J.M. Coetzee and that there are smart, funny, and informative things to say about both, and that you shouldn’t have to choose.

Book Riot is the largest editorially independent book site in North America. It regularly achieves Technorati’s “#1 Most Influential Site” in the books category and is a Technorati Top 100 most influential in the entertainment category.

What is the “Read Your Way Into 25 Amazing Authors” series all about?

You know the feeling: There are so many fantastic authors and great books out there that sometimes it’s hard to know where to begin.

Say you’ve always wanted to read something by William Faulkner. You probably know a bunch of his books: The Sound and the Fury; As I Lay Dying; Light in August; Absalom, Absalom! Maybe you’ve even come close to buying one. But every time you think about it, there’s that big question:

Which should you read first?

Start Here solves that problem. It tells you how to read your way into 25 amazing authors from a wide range of genres–children’s books to classics, contemporary fiction to graphic novels. Each chapter presents an author, explains why you might want to try them, and lays out a 3-4 book reading sequence designed to help you experience fully what they have to offer. It’s a fun, accessible, informative way to enrich your reading life.

After successfully raising $25,287.00 to fund volume 1 of your Read Your Way Into 25 Amazing  Authors series through KickStarter, and now just launching the KickStarter campaign for volume 2, do you have any advice to offer those seeking to fund a book publishing project using crowd funding resources?

1) You’ve got to have an established following and a very good booster network to be successful OR have a super cool offering. In 2012, KickStarter reported that 70% of publishing projects FAILED. Adjust your expectations accordingly.

2) If you decide to crowd-fund a book, understand that the first time will be a ton of effort. So, plan to publish a series or multiple volumes so that you can take the knowledge of the first time and apply it for greater efficiency (and margins) on subsequent efforts.

3) How you promote a project will vary according to your offering, but as you plan, note this: think soldiers, not generals. Don’t get too caught up in trying to attract@BigNameFamousPerson to contribute to the project or share it with their followers. If someone with a million followers tweets about what you’re doing, you won’t get much out of it unless their followers have a reason to care about your project *beyond* the fact that @BigNameFamousPerson tweeted it.

What’s next on the horizon for Book Riot?

Book Riot has fairly aggressive goals for the rest of this year.  Should the Kickstarter be successful (go back it if you haven’t!), we’ve got a book to publish.  In the summer, we will be launching a subscription eZine that will combine the best content that appeared on BookRiot.com with fresh subscription only content.  We are also working with partners in development of a social web app. Finally, Book Riot is a community, and we plan to launch Book Riot events in 2014 that will NOT be your typical bookish event.

Where can people learn more about Book Riot?