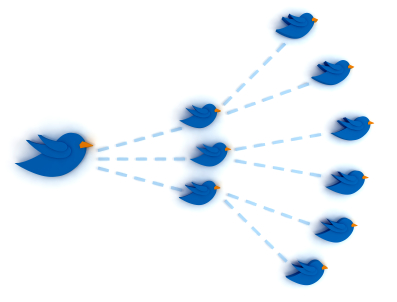 There’s an actual science behind promoting your book on Twitter — or more accurately, there’s enough good data out there to inform how you approach using Twitter as an author.

To make the most of your social media time, you want to maximize the effectiveness of each and every tweet. But how?

First, you should schedule your tweets at peak hours to get them in front of the most eyes. Second, you want to craft tweets that encourage action (retweeting, purchasing, replying, etc.)!

We recently attended a webinar by the internet marketing experts at HubSpot called “The Science of Twitter.” It’s full of great Twitter stats and best-practices. Many of the most memorable tips fell into the category of “That’s so common sensical I can’t believe I haven’t made a habit of it already!“

Below are a handful of those common sense tips from HubSpot (but check out the full webinar for more great info).

1. Longer tweets get more clicks. Internet marketers like to tell you to keep things short. But a tweet is only 140 characters, so it’s one of the few cases online where you actually benefit from using all the space you’re allotted.

3. Tweet in the afternoon and evening. After 2pm, Twitter traffic increases fairly dramatically. Maybe folks feel like they’ve got enough work done for the day that they can afford to sneak in 5 minutes on Twitter. So schedule your tweets with those people in mind.

4. Tweet closer to the weekend. As the workweek draws to a close, Twitter traffic soars — with Friday being the busiest day. So your heaviest Twitter activity should be on Thursday and Friday.

5. Ask for the retweet (“pls RT”). A lot of times in life the simplest way to get something is to ask. The same goes for Twitter. People are far more likely to retweet your content if you ask them.

6. Spread tweets out by at least 1 hour. You want to get the most people possible to see your tweets. By spreading out your Twitter activity by at least an hour, you’re increasing the likelihood of different folks seeing your activity. Plus you’re not annoying your followers by cluttering up their news feeds all at once.

How have you promoted your book on Twitter? What works? What doesn’t? We’d love to hear about your experiences in the comments section below.

Read More
Nine Things Authors Should Be Doing On Twitter Right Now
How To Lose Fans And Alienate Followers
Why Podcasting Interviews Are Essential For Authors
Promoting Your Book On Twitter: 10 Tips For Shy Writers
9 Things Authors Do That irritate Their Facebook Fans