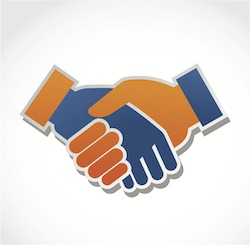 According to Michael Bourne (who writes for The Millions and Poets & Writers), successfully navigating through the world of literary agents requires— what, talent? Patience? Perseverance? Nope. Success requires connections!

In his recent article “A Right Fit,” Bourne says:

If that sounds like I’m saying, “It’s all about who you know,” that’s because that is exactly what I’m saying. You can rail about how unfair that is, and how it makes publishing into an incestuous little club, and to a degree you would be right: a lot of very dumb books get published because somebody knew somebody. But that’s the way the machine is built, people. It may come a-tumbling down in the near future in the face of e-books and indie publishers, but for now, if you want to get published by a major publisher, you have two choices: you can keep banging your head against a wall and be angry, or you can figure out how to get yourself into the club.

To do that, you have to immerse yourself in the literary community. Five years ago, with my first book, I sent roughly 60 query letters to agents and editors at smaller publishing houses. I had an MFA, a few publications in small literary magazines, and not much else. My success rate – that is, the percentage who asked to see all or part of the manuscript – scraped along at about 10%. It was, let me tell you, dispiriting as hell. Then I went to a couple writing conferences, and my success rate began to climb. I met agents in person and told them about my book. I met other writers who referred me to their agents. By the end, my book was getting read by about half of the people I sent it to, a fair number of whom seriously considered taking it on.

Now, before you get irate—the part of his article that I didn’t quote from is all about WHY agents sometimes default to going with the authors they know, or with friends of friends, or with familiar faces. It’s because they have to read 200 query letters a week, respond to most of them with rejection letters, find time to read the books which they might be interested in representing, oh—and then doing the real meat and bones of their work: pitching books and negotiating contracts. Time is limited, and a proven shortcut is to go with authors they already trust, or word-of-mouth recommendations.

So, what can you do to get your foot in the door?

First, check out this article we posted a couple weeks ago about pitching your book to agents in-person.

Then take a look at our Networking Tips for Authors: How to Be Yourself and Make the Right Connections.

What has your experience been like making connections in the literary world? Let us know in the comments section below.

Sell your book for Kindle, Nook, iPad, Kobo, and more!