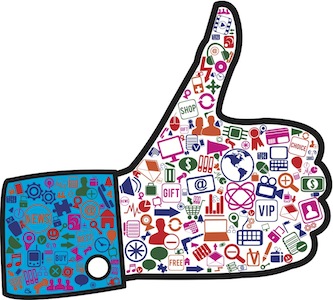 Note: This article is based on an article called “Facebook for Musicians: A Definitive Guide” by Bryan Kim (biz dev master at Tracksby). If you’d like to read more about Bryan, follow him on Twitter @freshbreakfast.

When it comes to promoting your books, do you have a Facebook strategy? Or do you just write occasional updates, post ’em, and hope for the best? According to social media guru Bryan Kim:

Not only do these inattentive social media habits fail on Facebook, they can actually hurt you in a very quantitative way.

In order to make sure you’re making the most of your Facebook efforts, you need to understand EdgeRank.

While Google loves to give its algorithms quirky names like Esmerelda, Boston, and Panda– Facebook has the less cool-sounding, but more to-the-point “EdgeRank,” an algorithm Facebook uses to determine how often your posts appear in your fans’ news feeds.

Most of your fans don’t explicitly visit your artist page, so the only realistic chance of reaching them on Facebook is to appear on their respective news feeds.   This is essentially what counts for “distribution” on Facebook.

EdgeRank’ algorhithm determines what a user will see on their news feed.  It attempts to filter out all the crap that gets shared on Facebook, and tries to predict what any given user will actually want to see.  To any given fan, your musician/band page is competing with thousands of other friends, pages and other objects to grab their news feed real estate.

So how does EdgeRank determine if your Facebook post is news feed worthy?  One word: ENGAGEMENT.  You need your fans to like, comment and share your Facebook posts.  Anytime one of your fans engages with one of your posts, they’re more likely to see your following posts.  Conversely, if a lot of your fans engage with your status update in the first few moments it’s posted, fans who sign into Facebook later are more likely to see it on their news feed.  So early engagement on a post can be proportionately more important.

Have you noticed how your most liked posts end up getting the most impressions?  Exactly.

There’s a lot of ways EdgeRank slices many factors that affect your news feed distribution.  If you’d like to dive into the specifics of EdgeRank, google it and you’ll get a wealth of detailed articles, like this, this, and this.

No matter how facebook slices it, your actionable instruction remains the same: GET MORE ENGAGEMENT!  Get those likes, those comments, those shares.  Make it your main goal with Facebook.  These engagement points build on top of itself, ensuring better and better distribution on news feeds over time as your engagement improves.  It’s something like a credit score for your Facebook page, and the algorithm lends you more impressions the better you perform.

So, how can you use EdgeRank to your advantage?

Bryan’s article gives some solid examples of how you can maximize your Facebook engagement. Below, I’ll mention the ones that could easily apply to authors.

1. Use photos whenever possible

Photos perform better on Facebook than mere text. So even if you want to post a status update, make sure you have a photo to accompany it.

If you have a reading in Chicago, most of your followers in NYC don’t need to know about it. They’ll just ignore your post, and that doesn’t help anyone! So geo-target your posts by city, state, country, etc. It’ll have a far better chance of reaching your intended audience. Bryan also recommends that internationally geo-targeted posts be written in that language. They’ll be a huge hit.

Less is more. (Unless you’re baring your soul to the world.) Shorter posts perform better because they’re easier to digest and easier to share.

4. Pace yourself– but keep your eye on the clock

You should be leaving at least 2 hours between posts, since a Facebook post has a far greater shelf-life than a Tweet. You need to leave yourself enough time for each post to catch on and stir engagement. If you’re gonna be away from the computer for a while, go ahead and schedule your posts ahead of time– but spread them out.

5. Talk to your fans

Here’s a no-brainer: interact with your readers. Like and respond to their comments. The more they see that you’re engaged, the more they’ll be inspired to interact and share– all the while helping with your EdgeRank score.

6. Holidays ain’t holidays for the internet

You might be surprised just how many people are online during holidays. Use that to your advantage.

With the Timeline format, your page can get a bit cluttered. Sometimes readers need to be instructed on what is most important. Pinning and highlighting posts will draw extra attention, increasing your chances of engagement, and improving your EdgeRank as those posts are displayed in your fans’ news feeds, too. Similarly, remember to mark important moments as “milestones.”

Hopefully this advice gives you a good start at boosting your EdgeRank and driving more Facebook engagement. I recommend you read all of Bryan Kim’s advice in his article “Facebook for Musicians: A Definitive Guide.” Even though that article is geared towards musicians, it’s valuable stuff. Just use your creative talents and replace “song” and “band” with “book” and “author” in your imagination.

Sell your books for Kindle, iPad, Nook, Kobo, and more!