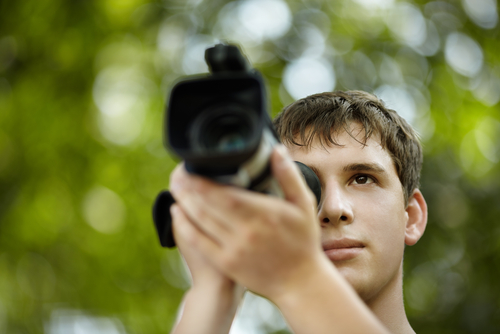 Promote your latest book with a book trailer

People love short videos. They’re easier to watch and easier to share, and that makes them easy to talk about. One of the most fun, creative, and effective ways you can promote your new book on blogs and social media is by shooting (and then sharing) a book trailer– a video advertisement for your book similar to a film or TV trailer.

Here are a few things to keep in mind when you’re developing your book trailer ideas.

There are a lot of crappy book trailers out there. And to the big, bad, scary world of publishers, editors, critics, and agents, a crappy book trailer looks worse than NO book trailer at all. So if you’re going to do it, it’s worth doing right. The better your video, the more likely fans will share it, bloggers will post it, and critics will take notice.

That being said, quality and budget are not always directly proportional. It’s quite possible to shoot a great trailer yourself with consumer-grade gear and a little old fashioned elbow grease. Likewise, you can hire the world’s most talented production team with all the fancy new professional cameras, but if they’re not invested in the project and jiving with your vibe, you could be left with a lifeless video and a dwindled bank account. Granted, if you hire pros, you’re PROBABLY going to get a better-looking product, but it’s worth mentioning here that it’s not a guarantee of quality.

So, the moral of the story is– no matter what approach you take, put enough time, money, and enthusiasm into this project to make it worth the effort. If you do, you’ll capture the imaginations of more readers and you’ll sell more books!

Remember that a book trailer is not a documentary. It’s not an electronic press kit. It’s not a resume. It’s not a summary. It’s not a thesis. It’s a teaser, plain and simple– and should be no longer than 60 seconds, though 30 seconds is preferable.

Short, quick. Awesome. In fact, about a billion times more awesome than the actual movie– which, for this viewer, was a sad disappointment. (So I guess the moral there is… make sure your book is awesome too!)

Also, think about those movie trailers that give away so much of the plot, the jokes, the surprises, and the drama that you end up saying to yourself, “Well, no need to see that one now!”

Your trailer doesn’t need to tell the whole story, just amplify the most compelling part.

There’s a saying in the music world, “Don’t bore us; get to the chorus!” Remember, in the world of viral videos the first few seconds matter– especially when so many people are sneaking YouTube or Facebook time at work and can’t be caught watching some epic on the clock.

Whether your approach is animation, reenactment, interviews, graphics, or… whatever else, say something big and say it first. Then fill in a few more details. Then fade to black before the viewer loses interest.

At every step of the way, you should run your ideas by someone you trust (especially if you’re developing, directing, and shooting your own book trailer DIY-style). Ask them, “Would this idea grab your attention as a viewer or reader?” “Does this sequence, script, and approach support the initial concept?” “Does it look good?” “Does it work?”

You don’t want to consult with a yes-man; you want someone who’ll give it to you straight. If something isn’t working, fix it now before you get any further in the project.

5. Flash your name and title in lights, and fast!

Some folks might disagree with this point. Maybe I’ve just grown skeptical and have no faith in our species’ attention span. But I think it’s worth displaying the author and book title somewhere towards the beginning (or at least by the 15 or 20 second mark of your trailer).

Sure, there’s a certain suspense we’ve come to expect from trailers where the title appears at the end– but it’s become cliché. Besides, everyone that clicks the play button will see the beginning of your trailer. Not everyone will see the ending. Better to get your name and book title into the viewer’s consciousness early-on, just in case the boss steps into their office and almost catches them on Facebook.

Well, those are 5 tips to consider when creating a book trailer. Obviously, they’re meant as more conceptual guidelines. If you need help with the technical aspects of film and video, I would recommend hiring a professional videographer and editor to help you see your book trailer project to the end.

Sometime soon we’ll discuss ways to promote your book using that trailer. For inspiration, check out the trailer below or click HERE for 4 more great examples.

Have you made a book trailer? How did you do it? What was the concept? How did it go? Feel free to comment in the section below, and leave links to your trailers!