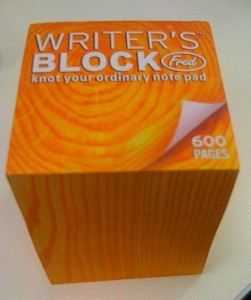 [This is an excerpt from a piece I wrote for The Creative Penn. Click that link to read all 12 steps!]

“The only thing we have to fear is fear itself.”

Franklin Roosevelt helped launch his presidency with those words. He was, of course, talking about measures the United States needed to take in order to pull itself out of the Great Depression, but he could have just as easily been giving a pep talk to writers who were wallowing in a creative slump.

Most of the time, writer’s block is nothing more than fear. Afraid of what, though?

-that you’re out of ideas.

-that your best work is behind you.

-that you’re a phony.

-that you’ve exposed too much of yourself, or not enough.

-that maybe you’re not the genius you thought you were.

Rid yourself of the Genius Curse

Elizabeth Gilbert did a great job in her 2009 TED Talk of illustrating how we’re crippled by an obsession with our own intrinsic genius. We’re limited by the notion that every utterance we make, every phrase we write, every idea we have, should be pure brilliance. No pressure, or anything!

Do we really think our work should be transcendent at every turn?

No wonder we end up going through extended periods just staring at a blank page or hating everything we’ve written recently. Creativity requires a sense of hard work and discipline as well as a sense of play and discovery.

Want to be cured of your fear of failure? Here’s step #1:

1. Don’t be married to results.

This first tip is common curing-writer’s-block advice, but it’s also critical! Most people have to write pages of utter crap before they stumble upon that moment, phrase, idea, or character that really makes things click. No one else has to see that pile of crumpled papers in the trash. It’s your little secret.

Remember, brilliance has no deadline. Just sit back and enjoy the sound of your fingers on the keyboard or the scratch of your pen against paper. If you DO have a deadline, be easy on yourself and accept the fact that not every sentence you write will sparkle.

For the next 11 steps, check out The 12-Step Cure for Writer’s Block.