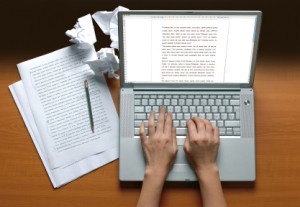 How to create a world your readers will want to inhabit

(The follow article is an excerpted chapter from CJ Lyons’ NO RULES, JUST WRITE: Crafting the Character Driven Novel, copyright 2011. Thanks to CJ for allowing us to share it with you. If you find it useful, please consider checking out the full book HERE.)

People often associate world building with science fiction or fantasy.  But I’d like to talk about a different way to build a world, one that works for any genre by focusing on specific word choices and details.

In order to draw the reader into your story you need to create a universe where you both control the rules and where you make a promise to the reader to also follow those rules.

If the world you create is 1950’s cold war Berlin, you’d better not have your hero pull out a cell phone.  Seems obvious, but world building is much more than mere scenery.  Every choice your characters make from what clothes they wear to the car they drive helps to create this alternative universe for your readers.

When a reader begins your book an implicit promise is made by you as the author: You will entertain without boring or insulting their intelligence.

This translates to the only two rules I follow when writing: Never Bore and Never Confuse.

You start building your world with the very first sentence–which is why so many books begin with descriptions of setting or weather.  But there are other more dramatic ways to pull your reader into your world.

I’m going to share with you my favorite first line.  It’s from Evan McNamara’s FAIR GAME.

Ever since we shot half of the Mineral County sheriff’s department, my deputy and I have been a little shorthanded.

With that one line, McNamara creates an entire world that he invites the reader to enter.  And with a hook like that, what reader would refuse?

How does McNamara do it?  He made sure his opening had three elements: it is visceral, evocative and telling.

Visceral: as in revealing the point of view character’s emotions.

Here we have a first person point of view. We immediately see that the narrator is laconic, that he’s a man of action (shot half the department), and there’s no remorse here, is there?  Makes you wonder if maybe he’s gonna get his comeuppance for those past actions during the course of the story.

Read that last sentence again. “Makes you wonder.”  You as in the reader.

McNamara creates immediate tension in the reader and involvement by the reader by making you care enough to wonder about something.

This is what I like to call Emotional Velcro and is a great technique for any hook, whether it’s an opening line, a pitch to an agent or editor, back cover copy, or a query letter.

Why? Because you’re evoking emotion in your audience.

That’s the next element in world building: Evocative details.  Using your word choices to elicit emotion in your reader.

We already discussed how McNamara created curiosity, but what other emotions did you experience in reading this one sentence?  A feeling of kinship or empathy at a lawman forced to kill half his department?  A sense of bravado?  How about anticipation of what might happen next?

And lastly, to successfully world build, you need telling details.  Every single detail you choose must do the work of creating your universe for the reader.

McNamara uses several telling details: half the department was shot (telling the reader that some survived), they were shot by “we” (telling the reader that it wasn’t only the point of view character doing the shooting), where are we? Mineral County–telling us the book will take place in a small town, rural setting.  And who is the main character?  The sheriff who’s been overworked and shorthanded but still has at least one loyal deputy to help out.

Wow!  Look at everything that one sentence achieved!

Okay, most of us won’t be able to pack that much oomph in one sentence.  But remember, book buyers make their decision whether or not to read your book in less than 3 pages, so you need to get those telling, evocative and visceral details up front.

Should you stop there with the first page?  Heck no.  Once you make that promise to your audience, you need to keep delivering, building that world brick by brick.

What are those bricks made of?  Details. The decisions your characters make.

In essence, that means that you’re not building your world alone.  By choosing the right visceral, evocative, and telling details to color your plot and character, you are inviting the reader to join you.

Once your reader is invested in your story, you’ve got them hooked!

As a pediatric ER doctor, New York Times Bestseller CJ Lyons has lived the life she writes about in her cutting edge Thrillers with Heart.

CJ has been called a “master within the genre” (Pittsburgh Magazine) and her work has been praised as “breathtakingly fast-paced” and “riveting” (Publishers Weekly) with “characters with beating hearts and three dimensions” (Newsday).

Learn more about CJ’s Thrillers with Heart at www.cjlyons.net and more articles for writers at www.NoRulesJustWRITE.com