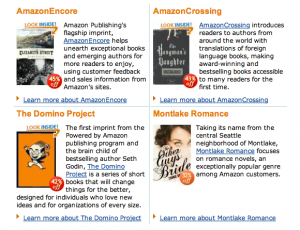 Amazon knows how to create a buzz, and their continuing creep into the publishing world has lots of people talking. In some ways the transformation from bookseller to publisher makes total sense – and others like Kobo are planning to follow suit – but it turns book publishing on its head (again), and adds another wrinkle to the conversation about the future of the industry.

Amazon’s publishing aspirations took root in May 2009, when the company introduced AmazonEncore, a program designed to throw a spotlight on books that were receiving loads of positive reader reviews, but weren’t exactly cracking the bestseller lists. From there, Amazon has added a new imprint every few months, attracting some noteworthy names to lend legitimacy to their publishing endeavor.

It is certainly causing a stir, with allegations of this hurtling towards monopoly, whisperings about the fear of God being instilled in the “legacy” publishers, and a good amount of questioning about just who Amazon thinks it is.

Amazon clearly thinks it’s in better touch with their customer, and are leveraging their position to foster a more intimate and direct connection between author and reader. Currently, Amazon Publishing has six imprints, (and a seventh on the way) and has published hundreds of books. Amazon’s imprints include:

– AmazonCrossing, which features English translations of foreign award-winners and bestsellers.

The push-back from other retailers

Amazon’s Kindle Reader only reads eBooks formatted in Amazon’s proprietary .azw format, and there are whisperings that other retailers might not carry titles from the Amazon imprints. (I went online and searched out five titles from the Thomas & Mercer imprint. All were available on Barnes & Noble in hardcover and/or paperback – none were available as a Nook book, an iBook, or any other eBook channel I searched.)

From the independent author’s point of view, Amazon’s imprints are not exactly a viable option. At this point, the model relies on the prestige and name recognition of an established writer or celebrity, exemplified by new signings like Tim Ferriss (The 4-Hour Body, The 4-Hour Workweek) and Penny Marshall, who made news when she inked an estimated $850,000 deal for her memoir, My Mother Was Nuts, with Amazon. Salmon Rushdie, Oliver Sacks and Phillip Roth are among the writers listed as having signed deals for exclusive eBook sales through Amazon, and the e-tailer gets exclusive access to the estates of William S. Burroughs.

On the other side of the equation is Amanda Hocking, perhaps the first independent author to make millions self-publishing her books in this new paradigm. Hocking recently signed a seven-figure deal with St. Martin’s Press, explaining that publishers provide necessary value, including strong editors and marketing muscle.

Of course, expectations are that Amazon (and Kobo) will provide these benefits as part of their publishing services, and Amazon is already providing access to Nielsen BookScan sales data – another example of how the e-tail sales giant is solidifying the relationship between writers and readers, cutting publishers and agents out of the equation, and shedding the traditional model of how information is dispensed.

How Amazon’s publishing efforts will shake out

There is no guarantee that these new imprints will have the dramatic long-term effects being voiced in the publishing community. Any deal that limits distribution – e.g. Amazon’s imprints not being available in eBook format, and possibly physical formats, on other popular bookselling sites – could end up altering the way this plays out in the long run. Others note that Marshall’s proposal was not worth the advance – Amazon’s deal was reportedly at least $100,000 higher than other bids – and that Amazon will have a learning curve to deal with as they get to better understand the publishing industry.

But we all know the industry is in the throws of a major upheaval. Who’s to say which parts of the industry Amazon and other new publishers need to learn, and which parts they’ll be teaching to their age-old counterparts. Time will tell, and I bet it won’t take long to find out.